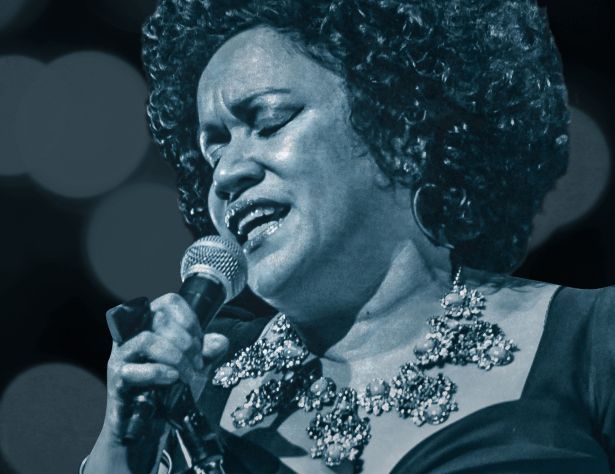 For those unfamiliar with the show, can you start by telling us about the format of At Last: The Etta James Story?

VB: At Last: The Etta James Story is a narrative concert. I tell Etta’s story and in between, sing her songs. There are 23 in the show – all great and her story is fascinating.

I’ve read that Etta James is your favourite singer. As a performer, what does it mean to you to sing her songs on stage?

VB: I take it very seriously. I have a lot of respect for her. When I started in this business at 17 she was the one I listened to everyday. I liked the way she sang with power and honesty.

Can you remember the first Etta James song you heard? How did her music influence your own career?

VB: The first song I heard as ‘Roll With Me Henry’. I was instantly hooked. I loved the duet, I loved the voices, I loved the song. Her music has influenced my career greatly because of the way that she sang and I liked the fact that she could sing a lot of styles.

How did you come to take on the part?

And how did you prepare?

VB: I looked up a lot of stuff on the internet. I read her book ‘Rage To Survive.’ I already knew most of her music, so there was no problem there. The preparation was in preparing mu voice because the show is a very hard sing and I had to get vocally fit.

Is there a particular song that still really gets you every time you perform it?

VB: All I Could Do Was Cry, gets me every time. It’s so sad.

Given the longevity of Etta’s career, there are a lot of different styles in the show. Do you have a favourite song to perform? Or one that’s more of a challenge?

VB: My favourite song to perform is Tough Lover. The most challenging is The Fool That I Am.

You rose to fame with Australian Blues outfit, The Black Sorrows, with who you toured the world, performed for Nelson Mandela, and supported legendary musicians such as Bob Dylan, Billy Joel, Sting and Joe Cocker. How does touring with a theatrical production differ?

VB: Yes, very different. The same show every night! I thought I would get bored but I haven’t. I still love performing this show because I love the songs so much and never get tired of them.

You are accompanied by The Essential Band, whose line-up – unusually for a touring show – hasn’t changed since the show premiered in 2013. There must be a real chemistry there?

VB: Yes, we like each other very much and have an enormous amount of respect for each other – some of the members of the band I have been working with for over 20 years!

The show has been phenomenally received in Australia, where you performed sell out dates at the Sydney Opera House. How did that reception feel?

VB: I was very pleased with the way people reacted to the show. I was quite shocked at first, but Etta is fair dinkum and Australians love that.

What do you think it is about the show and Etta’s music and story that resonate so powerfully with audiences?

What are you most looking forward to about touring the UK with At Last: The Etta James Story? Have you performed here before?

VB: Yes, I have performed in the UK before. I am very excited to be doing this show. I reckon the audiences over there will love the show as much as audiences her. I mean, what’s not to love – great songs, great story.

You’ve long been known on the Australian music scene where along with your sister, Linda, you’ve been credited as having some of the best harmonies in the business. You recently collaborated with iconic singer-songwriter Paul Kelly. How did that come about?

VB: Linda and I have worked with Paul, on and off, for nearly 30 years now. He likes our harmonies and we seem to blend well together. He is one of my favourite people to sing with because of that blend.

You and Linda were both the recipients of the Outstanding Achievement Award at 2016’s Pacific Music Awards. How did it feel to receive such an honour?

VB: I was in a bit of shock really. I didn’t know what to say, so I didn’t really say anything. I just said thank you.

Tickets can be booked online on www.assemblyhalltheatre.co.uk or in person at The Gateway, (open Monday to Friday 9am to 5pm or alternatively at the Assembly Hall Theatre counter on Saturdays from 12pm to 5pm and from 90 minutes before a show’s advertised start time

Celebrate Mother’s Day within the stunning surrounds of Sweetwoods Park