Biddenden Vineyards is delighted to announce that it has been awarded Juice Producer of the Year at Produced in Kent’s prestigious Taste of Kent Awards 2017, which were held last night (Thursday 9 March 2017) at the Kent Event Centre, Detling. It is the first time Biddenden have won the category since the awards started 13 years ago.

Following the initial vote, which is carried out solely by the public, Biddenden and the other two finalists for Juice Producer of the Year were subject to a site visit and tasting from category sponsors and judges A.C. Goatham and Son.

Julian Barnes, Managing Director at Biddenden, said: “We are very honoured to have been awarded Juice Producer of the Year for the first time in 13 years at the Taste of Kent Awards. We feel that the award is a true reflection of our recent investment into a brand new double belt press and also a credit to the contract pressing and bottling we carry out for other juice producers across Kent.” 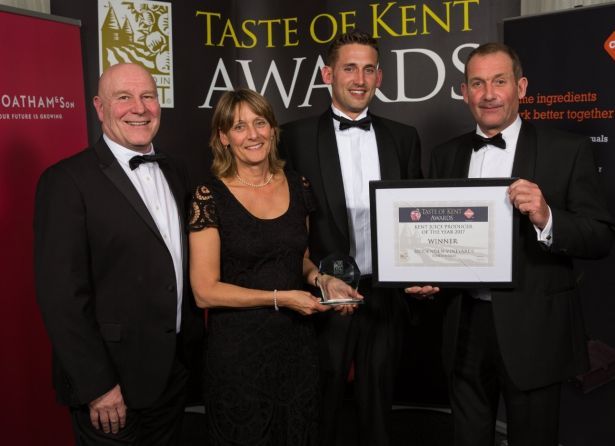 Biddenden’s classic farm-pressed apple and pear juices are made with Kentish culinary and dessert apples or Kentish Comice and Conference pears. Biddenden also produces Britain’s only naturally red apple juice, Red Love®, from a variety of the same name which is red skinned and red fleshed. The Clearly Juice collection, also produced at Biddenden, is a range of single and varietal Kentish apple juices each offering its own distinctive style. Each Clearly Juice is clear and very much wine-like in style, with named varieties accompanied by a Master of Wine’s comment.

Julian continues: “I would like to thank everyone who voted for us in the initial public stages. Your support has been truly amazing and we’re proud to have been recognised for the care and effort that goes into producing our juices.”

Biddenden supplies a number of independent restaurants, pubs, hotels, farm shops, delis and retailers across Kent, Sussex, Surrey and South East London. The vineyard is open daily to visitors throughout the year with free admission and tastings. For a more in depth and personal experience you can book a private guided tour. For more information please visit www.biddendenvineards.com or phone 01580 291726.

insideKENT's Exclusive Interview with Ruth Madoc, Star of The Wedding Singer at The Orchard Theatre