As a Brightonian, it’s very rare I get the chance to stay somewhere in my own city and look upon what it offers as a visitor would. And, as a writer, I’m often loathe to use the word cool – it’s dug it’s way deep into casual slang; its meaning now akin to ‘OK’, which has stolen a bit of its shine. By definition, ‘cool’, as an adjective, means ‘fashionably attractive; impressive; excellent’, and the Brighton Harbour Hotel & Spa fulfils each one of these descriptions with bells on. It’s made me want to move away, just so I can come back and stay – this is a weekend getaway well worth travelling for. BY POLLY HUMPHRIS 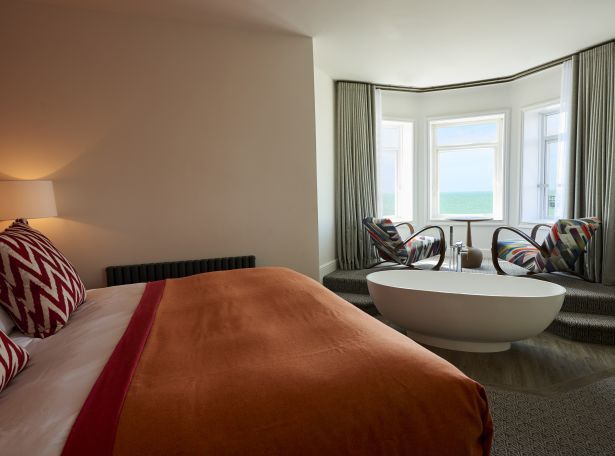 As embodies the relaxed signature style of the Harbour Hotel group (there’s a few in the pack, including Chichester), the Brighton Harbour Hotel – hotel, restaurant, cocktail bar and spa – has been developed to relish bit by bit and is instantly relaxing from the minute you enter the bright reception area. The staff are welcoming and smiley – a feature so often missed by other hotels who appear to confuse the term ‘luxury’ with ‘uptight’; the walls are decorated with textured wallpaper and quirky prints and paintings, and the atmosphere is upbeat and jovial.

Don’t be fooled into assuming this equates to lacklustre effort, however. Everything from the entire staff to the finishing touches in each bedroom, a staggering 35 of which offer spectacular views across Brighton’s iconic seafront, has been expertly planned and executed. It’s a well-oiled machine, confident in its position as a destination hotel that’s as suitable for couples and families as it is for businesspeople, or groups of friends.

The rooms are gorgeous; a lesson in how to do luxury linen in style, and with all of the finishing touches you’d expect from somewhere so chic. Decorated in a consistent shade of either blue, pink, or red (with contrasting splashes of colourful artwork and fashionable geometric-print furnishings), plump duvets, Oxford pillows and Egyptian cotton sheets make up beds so comfy you won’t want to leave; clean white bathrooms with power showers are stocked with White Company toiletries; and flat screen TVs are standard. Forget free WiFi (which, of course, is provided), they even throw in complimentary decanters of gin and sherry in every room. 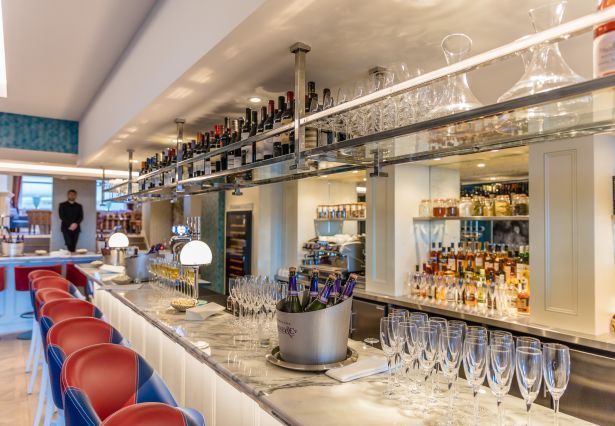 Speaking of drinks, I’m pretty sure I’ve found my spiritual home in HarBAR. I’m always a bit wary of the words ‘cocktail bar’. As any lover of a quality mixed drink will testify, cheap spirits and a bit of sickly sweet fruit juice do not a cocktail make, and there’s a fair few unwarranted ‘cocktail bars’ in and around Brighton merely peacocking to unruly hens. HarBAR is about as far from that as you can get. It’s slick, but not in an ‘oh god, I’m so underdressed’ way, and the only thing better than its design-led interior – think curved stools, art deco lamps and a beautiful marble-top bar – is its expert mixologists. I thought I’d found ‘the one’ in the vodka-based ‘Made in Chelsea’ from the classics menu until my wandering eye fell head over heels for the specialist copa gin and tonics. All of them.

Adjoining the HarBAR is the hotel’s restaurant, The Jetty, which manages to combine a breezy atmosphere with absolute professionalism. On my visit, the tables – bar two – were full, the staff were impeccably turned out and ready to recite menu options, and I had a crisp, cold glass of Section 94 Sauvignon Blanc (recommended) and a piping hot portion of cockle popcorn in front of me before you could say “service please”.

Starting with half a dozen classic oysters mignonette, doused in diced shallot and vinegar, we opted for the octopus carpaccio and a ‘simple’ prawn cocktail to start. Thinly sliced and served with a peppery rocket salad and a punchy lemon, chilli and chive dressing, the octopus had a lobster-like texture and was delicious. Anything but simple in taste, the prawn cocktail combined fat juicy prawns with crisp lettuce and the best Mary Rose dressing I’ve tasted – the secret, my taste buds think, is the use of tomato chutney in place of fresh tomatoes and it works wonders. 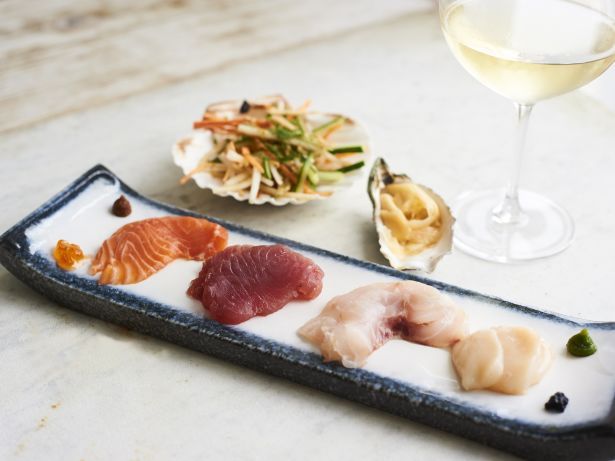 For mains, we devoured an entire bream, cooked precisely and served simply with a sorrel sauce and buttery crushed new potatoes, and the sashimi – a plate of delicate sea bass, tuna wasabi dressing, scallop mizzo and ginger, salmon and keta, with a crunchy Asian salad and soy sauce for dipping. I don’t mean to gush, but, in my opinion, Brighton has been calling out for a fish restaurant that isn’t afraid to use bags of flavour, and The Jetty does just that – the sashimi was my dish of the night and challenged my taste buds as much as it excited them with hits of salt, sweet, sour and spice that all somehow sang in delicious unison; it was fabulous. Be greedy and opt for a portion of really tasty truffle and parmesan fries on the side.

Besides the food, The Jetty’s interior is eye-catching too. A cool blend of tangerine orange and royal blue banquette seating, slick marble surfaces, flashes of gold and quirky, bespoke lighting, it’s calming and made suitably nautical by abstract prints and paintings relating to all things marine.

On that note, they’ve had a bit of luck where the hotel’s interior is concerned…word on the street had disclosed some months before the grand unveiling of the hotel’s spa that, while building what they thought would be a one-storey spa with six luxurious treatment rooms, a mood-lit indoor pool and a modern gym, the developers found yet another basement-level floor that they had never known existed. Incredible and fortuitous? Absolutely. But, how do you make a basement inviting, relaxing and in keeping with the rest of the hotel’s perfectly poised atmosphere?

You don’t. Instead, you fill it with a hydrotherapy pool, sauna, steam room, two Scandinavian hot tubs, relaxation room and exclusive private hire area and let it speak for itself. Of course it flows beautifully from its pearly-tiled, lemon-scented upstairs counterpart, but the basement of an already atmospheric Georgian building isn’t just any old basement and this one’s natural features – exposed brick archways, cosy den-like areas and floor-to-ceiling wooden shelving – are all accessed via a polished concrete curved staircase: a veritable stairway to haven. 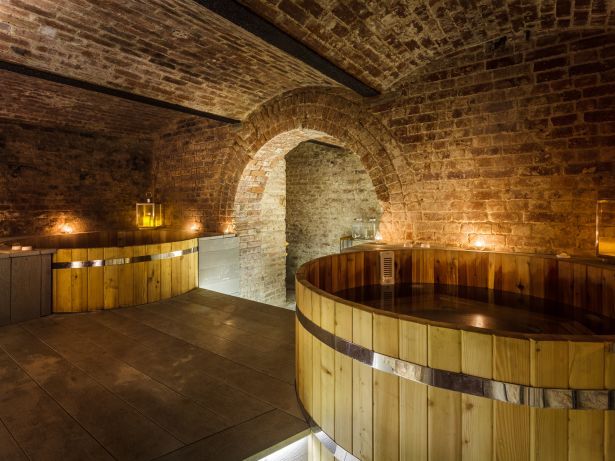 Anyone is welcome to visit the spa (whether they are staying at the hotel or not) for a one-off treatment, an indulgent spa day, or a spa break, and there’s an entire catalogue of wonderful wellness to be had; I’d recommend a visit wholeheartedly. Slap bang on Brighton’s buzzing seafront, this weekend away all rolled into one just oozes, well, cool; in every proper sense of the word. 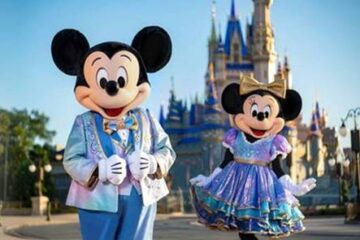 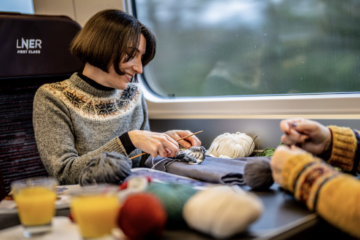 ALL ABOARD THE WELLNESS TRAIN!