Could we see Bernie Sanders as Joe Biden’s running mate? 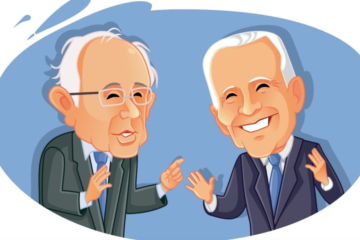 Yes, you read that headline correctly. And you’re right, it’s not likely to happen, but according to Julian Casablancas, lead singer of rock and roll band The Strokes, former Democratic presidential candidate Bernie Sanders would make the perfect running mate for Joe Biden, the man who is the dead-set favourite to take on Donald Trump in the 2020 US presidential election.

“I feel like if [Biden] rolled the dice and did something dramatic and chose Bernie as his VP, he would win easily,” said Casablancas recently. “But I don’t think he’s gonna do that. If he chooses someone boring, it’s probably not so good.”

So, what are the odds on Democratic nominee? Well, Biden is well clear in the list of favourites, but the decision of who will run alongside him and serve as vice president if he is elected is a big one. The idea of Sanders partnering Biden, after the two disagreed on plenty of issues throughout the campaign to win the Democratic nomination, is perhaps a long shot. But while Casablancas may not have all the credentials as a political commentator, he makes an understandable point about how uniting two Democratic candidates who were once at odds would increase their chances of success.

Arguably, Biden has put himself in the driving seat through his more measured approach to policies compared with Sanders, who is a more radical thinker. In order to win back the White House and defeat Republican President Trump, it’s crucial for the Democrats to put forward a candidate who can win over those voters who may be on the fence as to who they’re going to vote for. Biden fits that bill better than Sanders, but if the pair were to team up, they would arguably get the best of both worlds, and Sanders’ presence would encourage many young voters to get out to vote on Election Day.

It’s no surprise that Casablancas is championing Sanders for the vice presidency, since both he and the rest of his band have been firm supporters of the 78-year-old, and have even performed concerts at his campaign rallies in the past. Casablancas and the rest of The Strokes are among the many celebrities who have given their backing to Sanders in the past, and you can understand their eagerness to see him on the Democratic ticket, even if it’s not as the main man.

Of course, this is all pie in the sky at this stage. Biden has already stated that he intends to choose a woman for his running mate, and ultimately, having Sanders alongside him on the campaign trail would perhaps not be the most effective strategy, since the two men are opposed in certain areas of policy.

It remains to be seen who Biden will pick as his running mate. It’s a big decision, especially since the prospective Democratic nominee has narrowed the gap on Trump in the polls, largely due to Trump’s handling of the coronavirus pandemic and the protests following the killing of George Floyd at the hands of Minneapolis police. While teaming up with Sanders may seem like a long shot, in the often topsy-turvy world of politics, you just never know.

A Guide to Optimising Your Workout

Could we see Bernie Sanders as Joe Biden’s running mate?