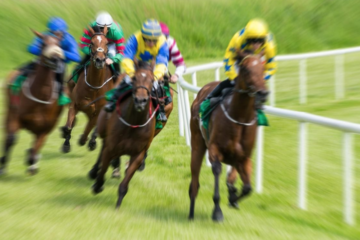 Fans of horse racing have been left twiddling their thumbs since March 17th, the date when the sport was officially suspended as a result of the coronavirus pandemic. It’s been a difficult time for sports fans, as the virus has put paid to the vast majority of sporting events around the world. We’ve been left scraping the barrel for any live sport we can get our eyes on, but with some sports set to return sometime in early June, there could be light at the end of the tunnel.

This is normally the time of year when the flat racing season is beginning to stretch its legs and get into full flow, but the pandemic has meant that the 2020 campaign will look significantly different to previous years. The obvious change is that the vast majority of events will be held behind closed doors to prevent large crowds from gathering, and there will be various protective measures put in place for jockeys, including wearing face masks.

But while this flat racing season may have a strange feel to it, there is still a lot to be excited about, especially having been starved of live sporting action for the last couple of months or so. At the moment, a section that contains the horse racing cards for tomorrow’s races may look sparser than usual, but it won’t be long before we’re back in the thick of live action once more. Here, we’ve put together a quick list of races to look forward to when horse racing gets underway at last.

One of the notable absences in the sporting calendar as a result of the pandemic has been the 2,000 Guineas, which is usually run in early May. There is currently no date set for the rescheduling of the event, but it is hoped the race, first run in 1809, will be held later in the summer. It’s traditionally run over one mile and is open to three-year-olds only. Last year, the father-son combo of trainer Aidan O’Brien and jockey Donnacha O’Brien were victorious with Magna Grecia.

Alongside the 2,000 Guineas you’ll find the 1,000 Guineas, similarly run over one mile, but the difference is it is open to three-year-old fillies only. It is likewise usually held in early May, but also fell afoul of the government regulations surrounding the coronavirus pandemic. The race is likely to be rescheduled for later in the summer, when O’Brien senior will be hoping for yet more success, after Wayne Lordan’s win last year on Hermosa.

Another of the five Classics of the British flat racing season, the Oaks is usually held in early June and is part of the Derby Festival at Epsom. Unfortunately, the coronavirus pandemic has put paid to the Festival as a whole, but there is still every intention to run both the Oaks and the Derby behind closed doors at some stage this summer. It was Frankie Dettori who got the win last year, riding the John Gosden-trained Anapurna.

The Derby is one of the oldest and most historic races in the horse racing calendar, and is always one of the most highly anticipated events of the year. Just like the Oaks, it is planned that the Derby will take place at some stage behind closed doors, which will create an interesting and unusual atmosphere to the race in comparison with the heavy fanfare it usually attracts. Seamie Heffernan was the winning jockey last year, after steering the O’Brien-trained Anthony Van Dyck to victory.

Another big event in the flat racing calendar is Royal Ascot, and plans are in place for the festival to go ahead behind closed doors. In fact, this year’s Royal Ascot will feature an extra six races across the five days, altogether creating more excitement for those tuning in on TV. However, biggest of all these races is the Ascot Gold Cup, an event steeped in tradition. Dettori and Gosden have had the race in the bag in the last couple of years, with the Italian winning on Stradivarius in both 2018 and 2019. The question is whether Dettori can make it a hat-trick this year.

Could we see Bernie Sanders as Joe Biden's running mate?