A DREAM came true for amateur actors from Canterbury when they performed at the world-famous home of the Royal Shakespeare Company (RSC). 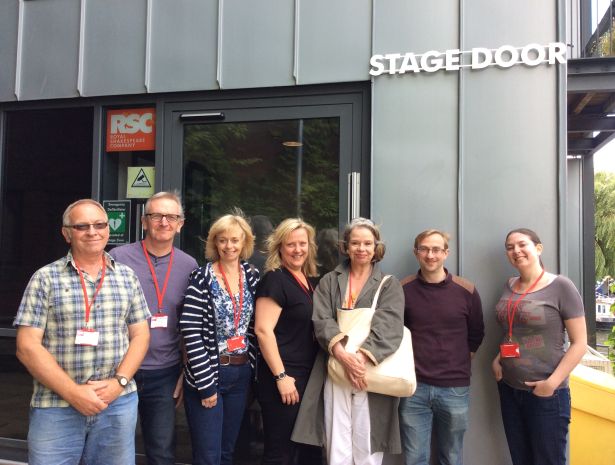 The five members of the Canterbury Players were reprising their roles as the Rude Mechanicals in A Midsummer Night’s Dream, the RSC’s Play For A Nation, with a professional cast at Stratford-upon-Avon. The production was first staged at The Marlowe Theatre in April.

“Canterbury audiences were more than enthusiastic about our performances, loving every minute and showing clear pride in their local actors. However, Stratford was a different, more diverse, audience, one with no local loyalty but possibly a more regular exposure to the RSC,” she said.

“The audience was not the only thing the Canterbury actors had to deal with that was different. A Midsummer Night’s Dream had, literally, worked like a dream on the Marlowe’s large stage, enabling actors to project their performances to a large appreciative audience with a frame designed to clearly mark the boundaries between reality – the audience – and the imaginary world they are invited to understand and appreciate – the stage. But, the stage at the RST is a thrust (the audience surrounds actors on three sides) and the galleries are much closer than the upper circle at The Marlowe, creating a sense of the audience being much closer  and higher than The Marlowe.

“Many actors may have approached adapting their performances to a new space with trepidation, but not Canterbury Players! They were their usual, curious, hardworking and talented selves and they had taken ownership of the thrust within less than half an hour. It provided them with new opportunities to connect with their audience and speak more intimately to them and the full-house audiences just loved them!”

Sally added: “Canterbury Players have been some of the luckiest amateur actors in the world, working on two fabulous stages and learning how to adapt quickly and efficiently. And the cherry on the cake was the fireworks that went up over a balmy  Stratford after the final show. What a dream!”

Canterbury Players’ next production is Richard III at The Gulbenkian Theatre in November. It is directed by Sally.