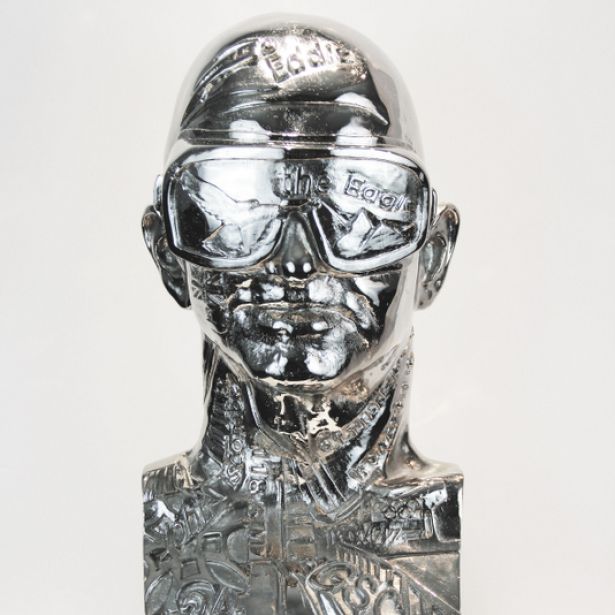 To time with the March 17 London Premiere and March 28 UK film release, the ski jumper has had his head cast by world-leading body cast sculptor Louise Giblin MRBS. They met while Louise was a guest of body cast model Heather Mills on Channel 4’s The Jump 2015 and Eddie later travelled to her studio to be cast in silicone and plaster.

The resulting surface design was of Eddie’s choosing – including many details from his life leading to Calgary 1988. The first of the edition is in nickel plated bronze that can last 3000 years.

Eddie will receive one of the limited edition of three of the sculpture. Others of the edition will be displayed for sale in England and Scotland with a proportion dedicated to charity.

Member of the Royal British Society of Sculptors, Louise Giblin (1963-) lives and works in East Sussex.
At 19 she was taught life casting by a man who had cast death masks for an undertaker. She studied art at Portsmouth, Brighton and Chelsea, where she undertook an MA. Her tutor at Brighton was Antony Gormley, creator of Angel of the North and famous for have multiple casts made of his own body.

Louise received an international award for sculpture at Florence Biennale Oct 2015 and will be representing UK in an international artist competition at Art Revolution Taipei, Asia’s biggest art fair in April 2016.

A Touch of Cornwall Comes to Canterbury