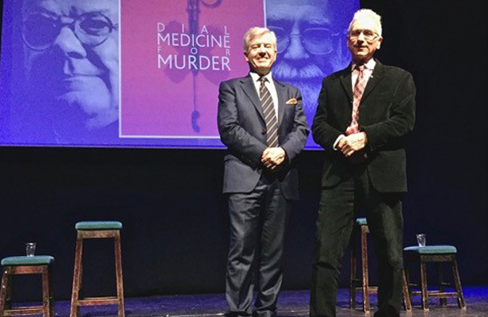 A fascinating evening performance on the story and juxtaposition of the two most notorious British physicians of the 20th Century, Dr Harold Shipman & Dr John Bodkin Adams. This show was one of the great successes of the last two Edinburgh Festivals.
Join Dr Harry Brünjes and Dr Andrew Johns in the Castle’s Banqueting Hall as they explore the reasons why these two doctors turned from medicine to murder. The production compares and contrasts the background, arrest, trial, legacy and psychopathology of Shipman and Bodkin Adams interspersed with film footage and contemporaneous news items.
Dr Harry Brünjes and Dr Andrew Johns first met as medical students at Guys Hospital and went on to careers in general medicine and forensic psychiatry respectively.
Guests are invited to arrive from 7pm for the opportunity to explore the magnificent state rooms of the Castle before the lecture begins in the Banqueting Hall at 7.30pm.