Excellence without gimmicks at Pascere, Brighton

Brighton is awash with restaurants; some of which are very good, some of which are pretty average, but all of which are competing for the locals’ evermore voracious appetite for exceptional food. As laid back as the city seems, Brighton is a demanding mistress when it comes to dining and certainly doesn’t entertain pretenders. Pascere – a clever and standout addition to the city’s foodie scene – couldn’t pretend if it tried.

Walking into Pascere (from the Latin meaning ‘to graze’), what strikes first is the absence of any affected elements of ‘cool’, the focus on which is a trap that so many new Brighton restaurants – desperate to be noticed among the throng of really top-notch eateries that now pepper the city – fall into. Choosing not to depend on the apparent safety blanket of a Lanes location, the restaurant sits at a midway point between the late-night revelry of West St and the whimsical bustle of said Lanes leaving it open to attention from both heavily, but often separately, tread paths; clever. 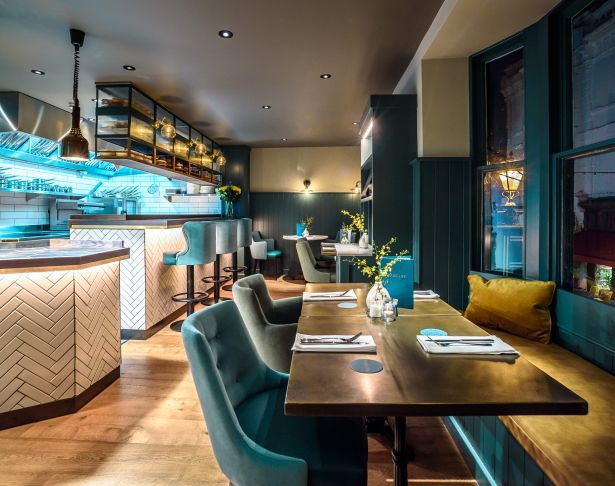 Equally confident and not at all forced is the décor. A mix of dark teal and mustard yellow, it’s effortlessly, but undeniably very stylish, and wonderfully unstuffy too, a theme that continues upstairs where you’ll find a small open kitchen, so curious diners can watch head chef, Johnny Stanford (formerly of the The Pass at the South Lodge Hotel), as he wields all manner of tools and whips up dishes as delicious as they are pretty.

Whetted at first by a remoulade of butternut that squeezed maximum flavour out of the sweet squash, we tried to hold our appetites at bay when presented with fresh, still-warm bread. A real Willy Wonka gobstopper moment, each little loaf tasted as much of beer and onion and then stout and treacle as it did bread, so we failed miserably and scoffed the lot greedily with whipped, salty butter. Beef cheek tortellini with mushroom puree in a beef consommé followed – an autumnal, really earthy dish, rich with slow-cooked meat and bathed in a glistening, delicate soup.

Often overlooked, peas are my favourite vegetable, so I was delighted to find an homage to them in the starters menu, cooked not once but three ways in fact: fresh-from-the-garden raw; cooked so that each juicy seed popped out of its skin satisfactorily; and, lastly, blitzed into a light-as-air custard in which the trio of legumes floated, topped with buttery lavender brioche croutons. An edible English country garden on a plate. 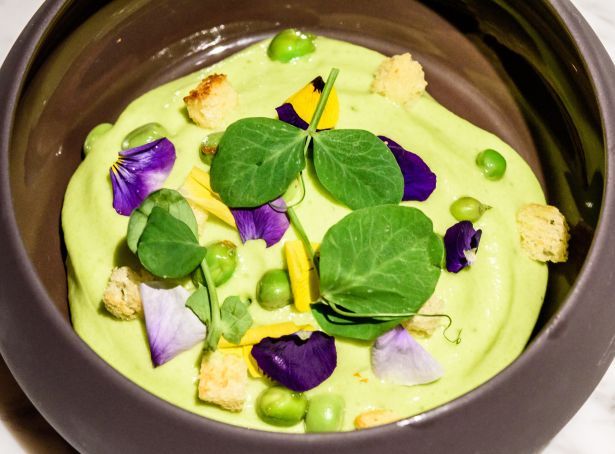 Mains were a tricky decision, partly because we wanted them all, but mostly because I wanted to avoid my kneejerk reaction, which would always be to choose the fish. Eventually, the fried stone bass lost out to the chicken breast with roasted leg, baby carrots, carrot fregola and hay mayonnaise. Before you scoff at somewhere I’ve not only referred to, but have headlined ‘without gimmicks’ serving hay mayonnaise, bear with me…it’s very ingeniously made by burning hay with a blowtorch, pouring oil over the top of that and then storing the oil in a preserving jar. The whole process is repeated with the same oil every day for a fortnight to intensify the flavour and it works, tasting phenomenal when paired with the tender sous-vide chicken breast, which was dewy with rendered fat and accompanied by the savoury bite of a roasted leg.

My only slight reservation about opting for the confit trout with trout tartare, roast, pickled and charred cauliflower and elderberry meringue, was confusion on whether the elderberry meringue belonged on the plate. I couldn’t quite grasp the concept…which is clearly why I’m not a chef. The trout was mild in flavour and meltingly soft, lifted by the cauliflower in its various guises and absolutely complimented by the flavour of elderberry, which melted out of its little crunchy meringue shells in bursts, adding more depth and texture to the dish. I stand corrected. 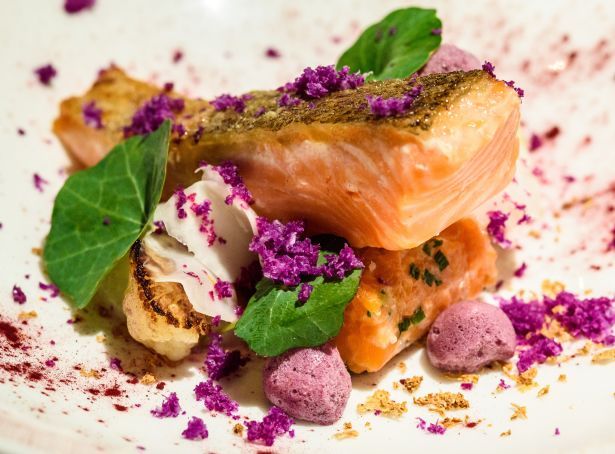 Besides the incredible quality of the food, Pascere’s very best feature is that although the restaurant’s website blurb states it offers dishes ‘with a twist’, nothing is twisted beyond recognition. OK, there are here are hints of Stanford’s wandering imagination – such as the hay mayonnaise and the elderberry meringues – that punctuate the menu, but there’s neither an ‘unctuous’ item, nor a deconstructed anything in sight. There’s style, substance and thought behind every ingredient put on the plate, which results in remarkable quality and creativity too. Painstaking though the methods behind Stanford’s fantastic food must be, they’re for the kitchen to know and the diner to savour; refreshingly, Pascere’s not concerned with shouting about it.

The restaurant’s biggest twist appears to be where the notion of fine dining is concerned and how the restaurant has translated this into a stage set for both fans of fine dining and fans of great food, but great food that doesn’t have to be eaten over a four-hour, ten-course extravaganza. As contemporary dining has evolved, the ‘tasting menu’ seems to have become synonymous with fine dining, but they’re two different styles of eating entirely and Pascere is loyal to them both. 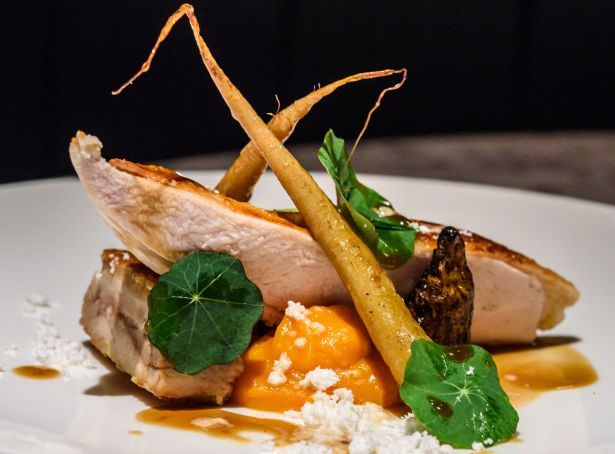 You can pop in for a small plate with a glass of wine (go for the Portland crab tart with shellfish custard without hesitation); you can opt for three courses – this year’s festive à la carte menu includes tasty new additions such as rabbit saddle and leg with lobster mousse, and pan-fried halibut with bacon lardo and chestnut puree; and, if you want to go the whole hog, the yuletide ten-course tasting menu is an irresistible mix of appetisers (all hail the aforementioned crab tart), smaller plates like mushroom orzo with blue cheese, and main events including roast goose.

Pascere is so wonderfully unstuffy it’s a breath of seaside-fresh air. A classy escape in what can be a frenetic city, it knows what it wants to do – welcome people in and feed them – and it does it with understated artistry and just the right amount of edge.

Celebrate the season at Neptune Canterbury

Excellence without gimmicks at Pascere, Brighton