Living in a neighbouring village, I have known the village of Bridge my entire life. A village that still showcases the traditional identity of Kentish life and halcyon days of times gone by with its summer fetes, cricket pitch, local shop, hairdressers and tea room, it is a place in which villagers take true pride to live in. The long high street that stretches over something of a valley is central to the community; at Christmas they hang glowing Christmas trees out of every window and in spring and summer, hanging baskets brighten doorways and pretty window boxes adorn the fronts of every house. Of course, like any classic Kentish village, Bridge comes with its own country pubs which have perched in their ancient seats for centuries. Bridge, in fact, has three. Or rather, had three. That distinctive third, once known as the White Horse, has taken on a brand new identity, Michelin-starred marvel, The Bridge Arms. 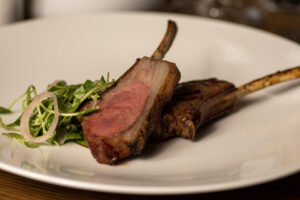 The magnificent duo responsible for this miraculous transformation is husband and wife team, Daniel and Natasha Smith. In 2016, Daniel was named The Observer’s Young Chef of the Year before settling at The Clove Club for five years where he was an integral part of the team that earned a Michelin star. His talented wife, Natasha has worked at the Michelin-starred Chapter One in Kent, as well as heading up the pastry kitchen of the Michelin-starred One Leicester Street. Most recently Natasha was appointed one of the head pastry chefs at Rocket, a prestigious events company in London. 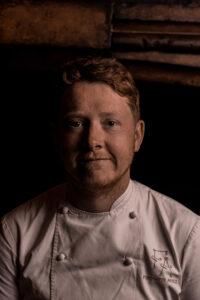 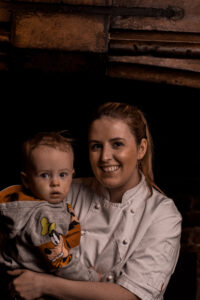 After taking on the Fordwich Arms, which gained a Michelin star within a year, the pair fell in love with Bridge and added The Bridge Arms to their repertoire, gaining their second Michelin star just 10 months after opening. The menu concept created by the combined creative imagination of Daniel and Natasha uses seasonal ingredients, with the desire to support local suppliers while highlighting the best of British produce. With two Michelin stars under their belt in astonishing time, Natasha and Daniel are nothing short of hospitality and culinary geniuses. I was lucky enough to sit down with Daniel for a short interview amid his very busy schedule and gain more insight into his world.

What do you like most about Kent and what unique opportunities does the county present when it comes to cooking and running the restaurant?

Kent: The Garden of England! We are so lucky to live in a county that offers an abundance of incredible local produce. As a chef, myself and my team feel very privileged to have the very best fruit and vegetables on our doorstep, alongside the beautiful Kent coast that provides some quality seafood. This is the key inspiration behind our menus. Another thing I love about Kent is its up-and-coming food scene, it’s great to be a part of that. 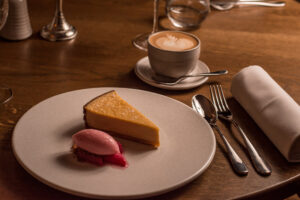 If there was one thing you would like our readers to know about you and your venture, what would it be?

It’s true we have achieved a lot at both The Fordwich Arms and The Bridge Arms, but if there’s one thing I want people to know, it’s that we couldn’t have achieved this success without our incredible team. At the Fordwich Arms we have kept  the majority of the team since we opened almost five years ago and hope to have the same experience with The Bridge Arms. Our main focus is of course the food – great food and great service is our ethos. Our dream was always to create amazing food but within a pub setting; we want our customers to feel as relaxed as possible. 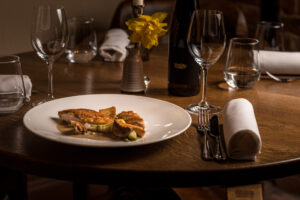 Tell us a little bit about working together; what’s crucial to being such a good team?

We believe that the team is the most important part of any restaurant. We are a family run business and because of that a lot of care is invested. As a couple running our venues, we are always on site along with our little boy Lorcan who knows all the team and the locals. We care passionately about the team and the community; without the support of our customers, our ventures and their success would simply not be possible. 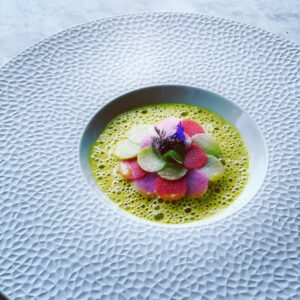 Tell us a little bit about the moments you found out you were to be receiving your first and second Michelin stars.

With both of the Michelin stars, we were incredibly excited. This was heightened even more as the businesses were both so young. With The Fordwich Arms’ Michelin star, the entire team got together to watch the ceremony and celebrated as one. That was a really special moment for me. The Bridge Arms’ Michelin star was a little more low key due to Covid restrictions, but that meant we got to break the news to the team ourselves, so it was just as special and memorable as the first. They really are a true testament to everyone’s hard work and dedication. 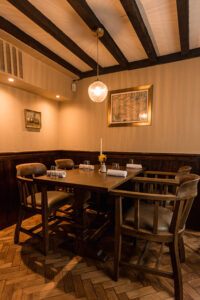 What are your greatest inspirations when it comes to creating the menus and coming up with the concepts of the restaurants?

Our kitchens are run by our head chefs, Kieran and Josh. When they’re designing the menu, our dishes are driven by the seasons. This means we look carefully at what produce is growing at the time and what fruits and vegetables at their very best. Once we establish that, we take these ingredients and build and design the dishes from there. We only use day boat fish too, so that part of the menu is really dependent on what the fisherman’s catch is that morning. 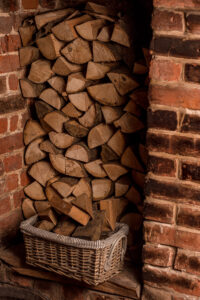 What are your plans for the future of your ventures/careers?

The Bridge Arms is still quite a young restaurant, therefore our main focus for now is maintaining and developing what we have already achieved. It takes a while for a restaurant to become fully established, so our main priority is making sure standards are consistently maintained at both sites. 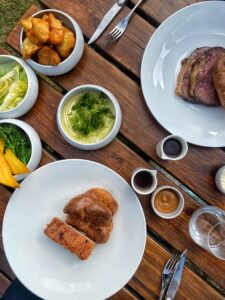