If you’ve heard of the concept, but not yet played, this is your chance to learn all you need to know about the global sport that is footgolf – and sign up for a round too.

Footgolf is a precision sport in which players kick a regulation-sized football into an oversized golf cup. It’s the perfect blend of football and golf. So, yes, precisely what you thought it was.

According to most authorities, the sport of footgolf was conceived in the Netherlands at the end of the last decade. The sport’s global governing body, the Federation for International FootGolf (FIFG), was established in June 2012. The first footgolf World Cup took place shortly after the founding of the FIFG.

What are the rules of footgolf?

As in golf, the number of strokes a competent footgolfer should take to complete a hole is deemed the ‘par’. Seasoned footgolfers should therefore be aiming for as many ‘birdies’, ‘eagles’, and ‘albatrosses’ as possible.

What should I wear for a round of footgolf?

Well, we positively encourage footgolfers to go ‘all out’ when dressing up for a round of footgolf. Plus-fours are definitely IN. Football shirts are pretty much OUT. We like to adhere to the ancient golfing traditions when it comes to etiquette and fashion.

In terms of footwear, astros and trainers are permitted on the footgolf course. Football boots and blades, however, aren’t considered ‘fair game’.

Where can I play footgolf?

There are seven certified footgolf courses in Kent at the moment. They are:

How much does it cost to play footgolf?

If you own a pair of trainers or astros, you’re ready to play footgolf! There’s no need to bring your own ball – all footgolf courses will supply you with a size 5 football upon arrival at the venue.

In terms of footgolf green fees, the price varies across the courses. As a guideline, though, you should expect to pay on average £10 for a round of 18 holes at a footgolf course in Kent.

Who’s the best footgolfer in the UK?

Ben Clarke is the number one ranked UK footgolfer at present. This is primarily because Ben is a brilliant footgolfer, but it’s also because Ben entered, and performed exceptionally well in a number of regional and national footgolf competitions across the UK in 2014, all of which feed into the UK rankings system.

In fact, the competition season in Kent (and around the UK) kicks off in early March. Check your local listings for competition dates!

Have any famous footballers (past or present) had a crack at footgolf?

Several world-class footballers have tried their hand at footgolf. This list includes, but is not limited to, Gonzalo Higuaín, Roy Makaay, Mesut Özil, Jean-Pierre Papin, and Juan Sebastián Veron.

To find out more about footgolf in Kent, contact Richard Brown on 07595 391584 or richardbrown@ukfootgolf.com 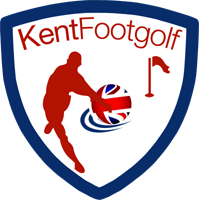