When head chefs get together, extraordinary things happen. And when the six head chefs of the group behind The Grove Ferry Inn at Upstreet, near Canterbury, got together recently to discuss their Christmas and, yes, Valentine’s menus, it was no exception. They – and I along with them – went foraging, and foraging, as it turns out, is most extraordinary indeed!

Before that early September day, I had been under the impression that foraging was mainly about mushrooms, with the occasional berry or bit of bark thrown in for good measure. I had thought it was about survival, Bear Grylls style, rather than a way to find tasty treats that would look good on any fine dining menu, but as we strode out in our wellies across Pegwell Bay (a beautiful and, as it turned out, surprisingly fecund area of country park in Kent), I soon understood that there was a lot more to it than that.

Foraging, at its most basic level, is really about discovering what the land has to offer, and finding the freshest, most organic (this is as natural as it gets), and exciting food that is literally on so many people’s doorsteps. And our hunt started as soon as we got out of the car because right there were masses of blackberries – big and juicy and perfect for picking. I was pretty pleased with myself, having recognised what I was looking at, and the chefs’ whoops of delight were testament to the excitement that everyone was feeling. Foraging is fun, there are no two ways about it; it’s like being on a treasure hunt where the prize is a mouth watering meal – now who wouldn’t enjoy taking part in that? 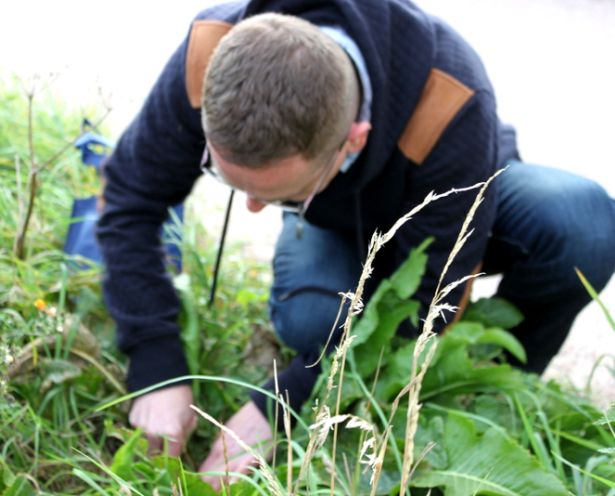 So, blackberries picked, we moved on, but not very far. Just around the corner we found rosehips which, I was told, made a delightful tea that was fresh and fruity and extremely refreshing. We picked some of these as we watched some of the group make their way down the slope and onto the bay itself. It was wet. Very wet. But who cared about that, when there was utterly perfect samphire to be had just ahead of us? Looking out across the bay, I hadn’t realise just how much of this “sea asparagus” there was, but Jason, head chef at The Grove Ferry, let me in on a secret – the darker patches of green were samphire. And now, with that knowledge, I could see just what a fertile place this was for this versatile vegetable – and it was all there for the taking.

In order to let our feet dry off a little, we made our way down the footpath rather than taking the more direct route through the marshy ground. It’s a good thing we did, or we would have missed perhaps the most prized find of the day – wild horseradish. Now this was a big deal because no one had expected it. But the ideas that the chefs were coming up with to use it with were incredible, and they just had to have it. So, using a spoon, various sticks, and a lot of effort, this enormous piece of horseradish was eventually unearthed. It smelt heavenly – spicy and pungent and just as horseradish should smell – and the sense of victory when we finally had it was huge. The fun and friendship of foraging is just as much as part of the experience as the finds themselves, and it made the search for me.

On our short walk around Pegwell Bay we discovered samphire, rosehips, blackberries, fennel, sea purslane, sea beets, sea aster, and of course, the legendary horseradish (along with an unidentified mushroom which we left behind, not fancying the game of mushroom roulette). Bags and boxes and crates were full of the stuff, and we had only been searching for an hour or so. I was even more impressed listening to the chefs discussing what they might do with their finds – images of beef wellington with buttery mashed potato, of fresh fish or oysters perhaps, served with earthy sea beets or samphire… But where was dessert?

I needn’t have worried.

Dessert was right ahead of us in the form of an unprotected apple and pear orchard. As we searched for a way in, we were confronted by a number of curious looking cows and one enormous bull. Should we? Shouldn’t we? It was a tough call; those trees were laden with fruit, but Jason, having regaled us with a hilarious story about when he was trapped up a tree by just such a bull on another foraging expedition, soon spotted something that meant we didn’t have to dodge any farm animals: a large apple tree just ahead of us, slightly off the path. Another lucky find, as it turned out, because next to this tree was a plum tree, just as full and just as ready to be raided. Here indeed were the real fruits of Kent, and it’s what Jason loves most of all: “The Grove Ferry is located in the heart of the Garden of England. The surroundings are ripe with the richness of vegetables, fruits and berries, offering fresh oysters cultivated in Whitstable and a great area for game. It’s truly incredible – you can go out in the morning and come back to cook a three-course meal using the treasures of Kent!”

Now, with our cars laden down with fruit and vegetables foraged in a short time in a small area, it was time to make some unforgettable dishes. Imaginations ran riot with ideas on what to make, and, importantly, how to present it all.

The results were stunning. A sea beet, samphire, and haddock veloute; a beef wellington that included sea purslane in the duxelle, and was served with creamy horseradish mash and homegrown carrots roasted in brown sugar; and a caramel apple betty with toffee cooked into the pastry itself, served with a stunning crème anglaise. Everything, even the butter and the flour, had been sourced locally, and most of it had been picked by us just a few miles down the road.

I was a convert. Foraging is the way forward. And as Jason knows all too well: “You never know what you might find, which keeps the menu ever-changing and in turn, keeps guests excited about the food.” 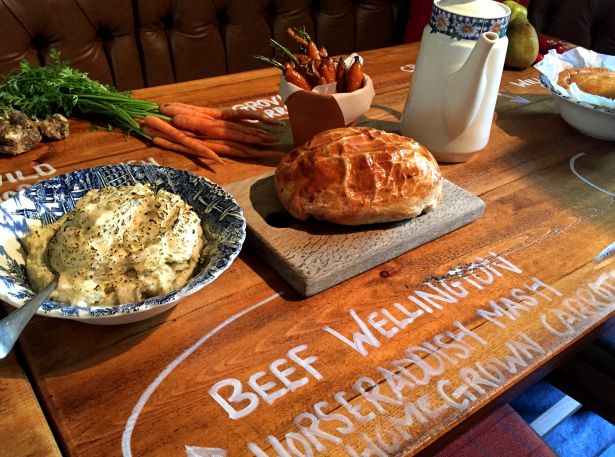