GIANT SHOPPING CENTRE TEDDY BEAR GETS A NAME THIS CHRISTMAS!

The winner of the Royal Victoria’s Place ‘Name the Teddy Bear’ competition has been announced and is….?!?!

The competition received a huge amount of entries and after lengthy discussions over tea and cake, ellenor’s Children’s Team crowned Theo Gibson as the winner choosing the name ‘Mister Magic’ for Royal Victoria Place’s much loved giant Teddy Bear.

“Theo has named all his old teddy bears Mister something: he has Mister Dinosaur, Mister Dog and Mister Pyjamas.  When I asked him what he thought teddy’s name should be he was adamant he should be called Mister Magic because he’s Father Christmas’s big friend and is very special so he MUST be magic, and then told me what I said in his entry.  He’s so happy now that everyone is going to get magic cuddles from Mister Magic and help the children at ellenor” says Jess, Theo’s mum.

To take part in the competition, local primary children were asked to get creative and give the giant teddy bear a name and provide a reason why they chose it.

One of the key reasons for choosing the name ‘Mister Magic’ was the touching sentiments that Theo had used to support his entry: “Everyone needs some magic in their lives and he will give everyone who cuddles him a little bit of magic at Christmas”.

“We would like to thank all the children that took part in the competition and we were really touched by the names chosen.  Unfortunately we could only choose one winner but there were some really fantastic names” says Hannah Ives, ellenor Respite Lead. 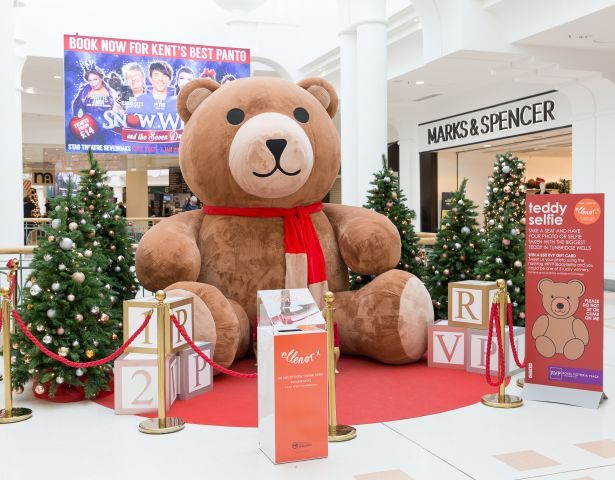 Theo’s family have won a £50 Royal Victoria Place Gift Card plus a family VIP invitation to meet Santa and attend the Festive Family Fun Day at the shopping centre on Sunday 18th November.

Marc Burchett, Marketing Manager of Royal Victoria Place, said, “We are delighted to be supporting ellenor again this Christmas and the vital work they do within our community. We just love the winning name ‘Mister Magic’ and would like to thank Theo and all those children who entered the competition. We hope that everyone who comes to see ‘Mister Magic’ will be generous with their donations and help us to spread lots of Christmas magic to all those children and their families who ellenor provides so much care and support to.”

The 3.5 metre giant teddy bear was hugely loved last year with shoppers and their families posting and sharing selfies of themselves and donating money to support local charity ellenor. Last year, the #TeddySelfie campaign raised nearly £3,000 for ellenor and helped to fund 90 play therapy sessions for very sick children across the Kent region.

GIANT SHOPPING CENTRE TEDDY BEAR GETS A NAME THIS CHRISTMAS!