Shoppers at Royal Victoria Place in Tunbridge Wells last Saturday were given a special surprise when they got the chance to have a selfie with ITV’s ‘Good Morning Britain’
Presenter Charlotte Hawkins and a giant teddy bear! Charlotte took time out from her busy schedule to come and support the Teddy Selfie Campaign which has been launched at Royal Victoria Place in support of local charity ellenor.

The 3.5 metre giant teddy bear was hugely loved last year with shoppers and their families sharing selfies of themselves on social media and donating money to support local charity ellenor. Last year, the #RVPTeddySelfie campaign raised nearly £3,000 for ellenor.

In November, Royal Victoria Place announced the winner of its ‘Name the Teddy Bear’ Competition as 4 year old Theo Gibson from Tonbridge who chose the name ‘Mister Magic’.

Charlotte Hawkins who is watched by millions every day on ITV’s Good Morning Britain and is also well known for her appearance on ‘Strictly Come Dancing’ and more recently as a presenter on Classic FM, is a celebrity patron for ellenor – the only charity in Kent bringing specialist hospice care to the child’s home, allowing families to spend more time together. 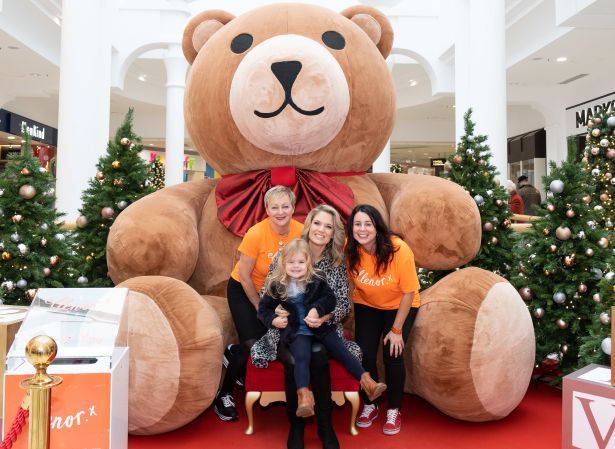 During her visit to Royal Victoria Place Charlotte spent time meeting staff and volunteers from ellenor and she praised the #RVPTeddySelfie campaign calling on shoppers to get behind the campaign and help raise valuable funds for ellenor.

Charlotte Hawkins says “It is wonderful to see so many families and shoppers here at
Royal Victoria Place supporting the #RVPTeddySelfie campaign. Taking care of a seriously ill child is one of the most demanding and difficult tasks a parent can face. Every dayellenor makes a difference to so many young lives and it is vital we help every family get the very best care and support.”

Her visit to Royal Victoria Place on Saturday 1st December was made extra special with a visit for her family to meet Santa in his magical grotto followed by lunch at Fenwick’s Terrace Restaurant.

Marc Burchett, Marketing Manager of Royal Victoria Place says: “We are delighted to be supporting ellenor again this Christmas and the vital work they do within our community. It was so kind of Charlotte to visit Royal Victoria Place and lend her support to our #RVPTeddySelfie campaign.  We hope that everyone who comes to see ‘Mister Magic’ will be generous with their donations and help us to spread lots of Christmas magic to all those children and their families who ellenor provides so much care and support too.”

The 2018 insideKENT Great Christmas Gift Giveaway WIN OVER £2,000 IN PRIZES!

Santas in trainers at Herne Bay