Staff from Maidstone based housing association, Golding Homes took on a 24-hour cycling endurance race round the infamous Brands Hatch circuit last week, in aid of their chosen charity Heart of Kent Hospice.

Golding Homes Chief Executive, Gary Clark, said: “At Golding we are proud to support Heart of Kent Hospice as our charity partner this year. Our staff are passionate about helping to raise money for the charity with Team Golding recently taking on the epic challenge of the 24 hour bike ride. It was a fantastic team effort overall and although tiring it was well worth it as we raised over £2000 for Heart of Kent Hospice. It’s not everyday you have the opportunity to ride around the famous Brands Hatch circuit in the dark for such a great cause.” 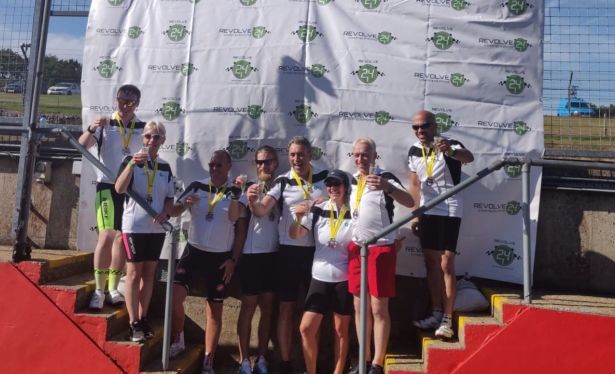 On Saturday 15 September at 2pm, the Golding Homes cyclists took to the Grand Prix circuit for the first time, an orientation lap. At 3pm a ‘Le Mans’ style start saw 158 cyclists run across the track, jump onto their bikes and get peddling; some were soloists aiming to qualify for other races or set personal bests, others were in teams of four, six or eight hoping to improve on last years’ performance or raising money for charity.

The Golding Homes team of eight cyclists, of mixed ability, took turns to cycle half hour and hour stints. Over the 24 hour period they completed 142 laps, equivalent to 245.486 miles. The hilly nature of the track meant together they climbed an impressive 9230 metres – that’s higher than the Ozone layer and into the Stratosphere!  They came an incredible 77th out of 153 finishing teams. Their epic effort has not only given each rider their own personal firsts and successes but has also helped to raise an incredible £2,390 to date for the Hospice.

Cycling teammate and Head of Regeneration at Golding Homes, Keith Mandy said, “this was a tough event, but extremely rewarding. I’ve formed some lifelong bonds with my brilliant teammates and we’re all so proud to have helped raised money for Heart of Kent Hospice.”