Head to head up catering at Tudor Park

Gary Head has become the new executive chef of Tudor Park Marriott Hotel & Country Club in Bearsted near Maidstone, Kent, and in so doing has gone back to his roots.

Born in Medway, Gary has honed his skills in both large scale and small high-end culinary environments around the country but is happy to be back in the Garden of England. 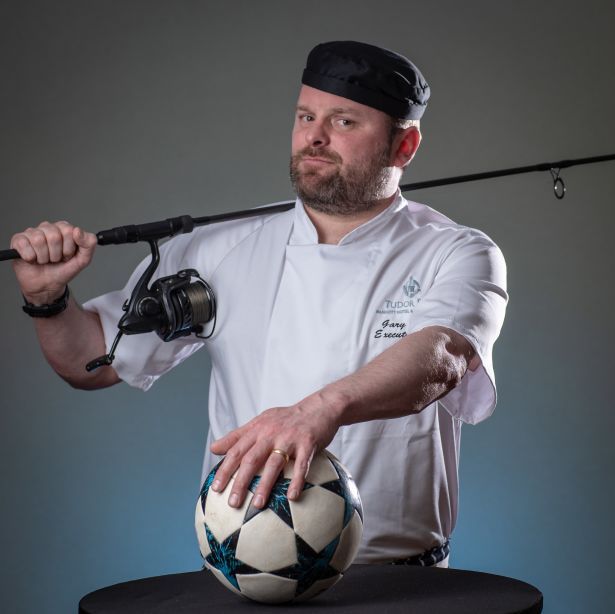 photo credit Nick Hawkes Photography.
Gary Head, new executive chef of Tudor Park Marriott Hotel & Country Club, happy to be back in the heart of Kent where he can continue his passion for the four Fs – fishing, football and fantastic food.

Classically French trained, he started his career at the iconic building Lloyds of London where he worked on private VIP catering for some of the world’s most influential financial leaders and catering events for up 250. The pull of Kent then took him to Leeds Castle, Tudor Park’s next-door neighbour, and then onto Bluewater Shopping and Leisure Centre.

Gary then went freelance, working at renowned sporting venues and landmarks such as The Oval, Farnborough Air Show, Lord’s Cricket Ground and the Paris Air Show. He spent six years at Arsenal football club’s old Highbury stadium, but says he rarely got chance to see any of the matches as he was usually working.

His career then took him to the Weald of Kent Golf Conference and Business Centre in Headcorn, Kent where he held the position of executive chef for 13 years before joining Tudor Park Marriott Hotel & Country Club.

“I had heard good things about Tudor Park from friends and to be honest I think I have been circling the hotel for many years subconsciously as I’ve worked at various venues close by during my career,” says Gary. “My experience in conference and banqueting will serve me well here, and my last job helped me understand the catering needs of golfers– although I have only ever played pitch and putt!”

Gary is leading a brigade of a dozen chefs responsible for Tudor Park’s Cast Iron Grill Restaurant, Brew Bar Lounge and Zest Sports Bar, as well as catering for up to 250 people at business and golf events and newlyweds who tie the knot at the hotel.

He enjoys classic French cooking “with a twist” and hopes to introduce more of this into the banqueting and conference menus. On his days off, the family man (he has two boys and a girl) likes to get on his mountain bike and explore the cycle trails of Kent’s Boxley Woods and the Bedgebury Forest. He is also a huge supporter of the `Stones’ (Maidstone United Football Club) which has its stadium just four miles from Tudor Park. And he is a keen coarse fisherman and regular visitor to Orchard Place Farm in Paddock Wood or Cackle Hill Fishing Lakes in Biddenden.

An Easter Festival not to be missed!

Head to head up catering at Tudor Park