Heart of Kent Hospice, based in Aylesford near Maidstone, is delighted to announce the appointment of Jim Barker-McCardle to the position of Chair of the Board of Trustees.

Jim joined Heart of Kent Hospice as a trustee in October 2016 and was appointed to the role of Chair following a formal selection process. 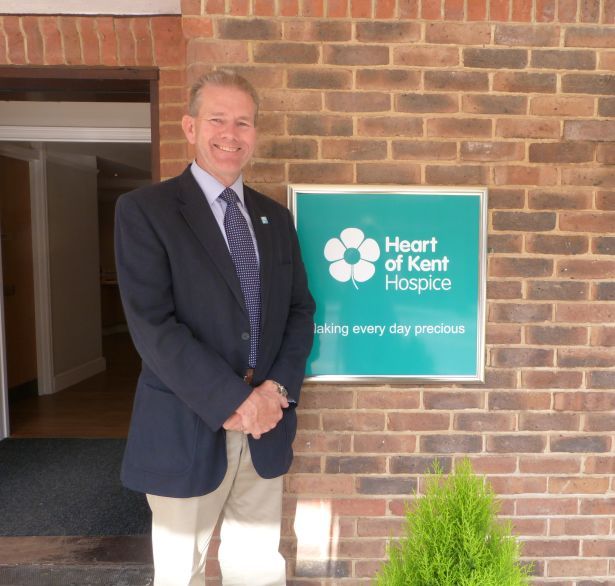 Jim’s first experience of the charity was when his stepfather, who was battling cancer, spent time at the Hospice. “Although this was some years ago I remember thinking that Heart of Kent wasn’t what I imagined a hospice to be. It wasn’t at all like a hospital and the atmosphere was lovely, caring and really cheerful which I know seems to be a strange thing to say in the circumstances.”

Years later when Jim was approached by a retiring Heart of Kent Hospice trustee and asked if he would consider becoming one himself, his immediate answer was yes.  “I feel privileged to be part of such an extraordinary and wonderful place. It is the most uplifting environment to be in and all day, every day, extraordinary people do extraordinary things to help and treat extraordinary people.”

On being appointed to the role of Chair of Trustees, Jim said: “It is wonderful working with and learning from a team of highly skilled and dedicated colleagues and volunteers.

“There are major challenges ahead, not least raising the funds, year on year, to keep providing outstanding patient care. We have many supporters but need many more and we need everyone living in our catchment area to know more about what we do and how we are funded. I look forward to helping make that happen.”

Chief Executive, Sarah Pugh said: “We are delighted that Jim has been appointed to the role of Chair of Trustees.  His contribution to Heart of Kent Hospice has been hugely appreciated since he joined the charity last year.  He becomes Chair at a challenging time and I am sure that his considerable skills, experience and expertise will ensure he makes a positive impact on the charity and I look forward to working with him for years to come.”

Jim will take up the position with immediate effect and serve for a term of five years. His new role opens up a trustee position and the Hospice welcomes applications to the role.

Anyone wishing to be considered for the position is invited to contact annie.bubb@hokh.co.uk for further information or to arrange an informal conversation with Sarah Pugh, Chief Executive.