We can all agree that Kent is the most beautiful place to live with its lush green woodland, fertile fields, and gorgeous coastal villages. However, it seems as though the modern Kentish Man and Maid aren’t alone in their feelings towards our great county; the area, in fact, has been occupied for thousands of years, with prehistoric finds being discovered in quarries (notably at Swanscombe Heritage Park, where a number of Palaeolithic-era hand axes were discovered, which date back 400,000 years).
by Lisamarie Lamb 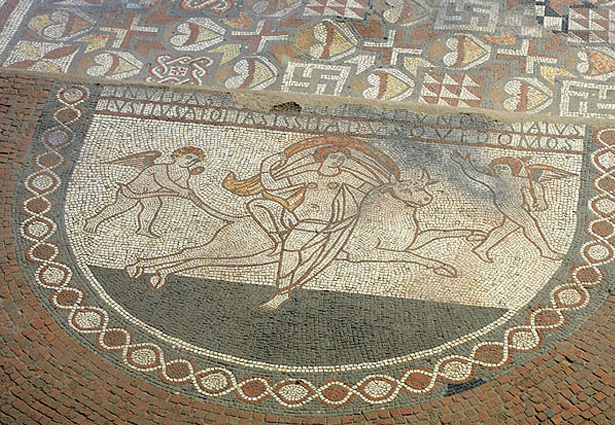 It was in this same location that the skull of the ‘Swanscombe Man’ was found. Subsequently established as being a woman, these were the oldest remains even found in the UK, until Sussex’s 500,000-year-old Boxgrove Man was discovered in 1994.

Kent is a strange name, without the usual suffixes of ‘-sex’ or ‘-shire’, and the word most likely means ‘border’. In 51 BC, Julius Caesar himself called the place ‘Cantium’. He found that the tribes in Cantium were the most civilised in all of Britain (mainly because they could make pottery as well as weapons), and it was he who, inadvertently, created Britain’s kingdoms by describing the chiefs of the various tribes as kings. They clung onto this title, word spread up the country, and a new Britain was accidentally born. In the Iron Age, a number of tribes could be found in Kent, including the Wealden People.

The Romans invaded in AD 43, and it was to Kent that they immediately went. Using Richborough Castle as a starting point, they even built a triumphal arch, which can still be seen today. They built many other things as well, including a major road network that set the tone for the rest of the country, connecting Kent to the major trading town of London (Londinium). This meant that Kent could now trade its wonderful produce, and a thriving market community sprung up. 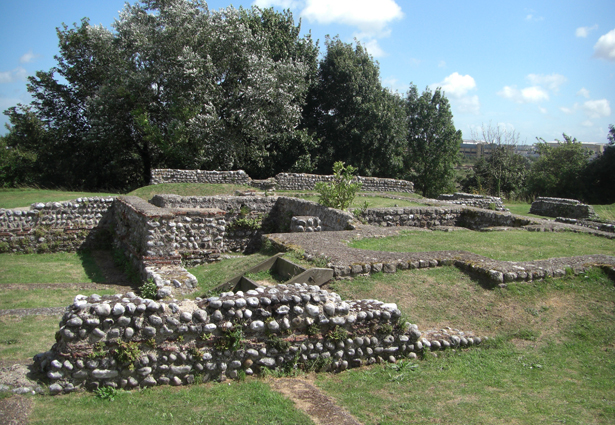 By the third century AD, it had become common knowledge that Britain – and perhaps Kent in particular – was the place to be, and the Saxons decided they wanted it for themselves. The Romans worked hard to protect their country by digging ditches around their fortifications (which later became what we know today as moats). The idea worked, and the Romans stayed in Kent for another 200 years, but eventually had to return to Italy to protect their homeland from attack – every soldier was needed, so many Roman villas (such as the one at Lullingstone) were simply abandoned.

Left to their own devices, the people of Britain once more divided themselves into kingdoms, and Cantia (as Kent was known by then) was split into two, with East Kent being ruled by the Jutes. It was at this time that, with the Romans gone, Canterbury began to emerge as a major religious centre.

When the Saxons invaded again (this time with little-to-no opposition), in the sixth century, they established Ethelbert as king of Kent (with Bertha as his queen), and this was when Christianity really took hold – Ethelbert had an interest in this ‘new’ religion, and welcomed Augustine in 597 AD when he arrived from Rome to teach the king about Christianity. Augustine became the first Archbishop of Canterbury, and it was for him that the world famous cathedral was built. 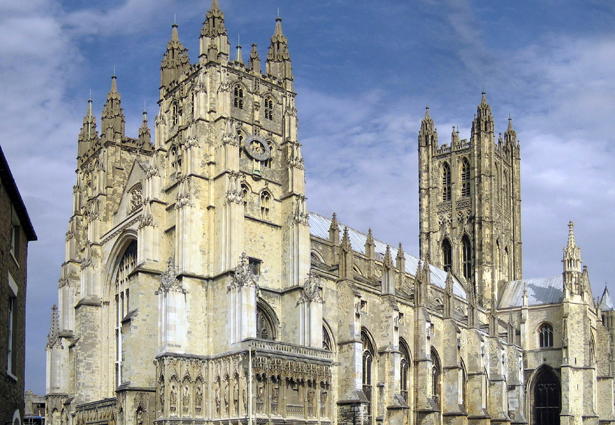 All was relatively peaceful until the Normans chose to invade Britain – William (the Conqueror) was set on being king of England, and Harold was in his way. He and his army invaded, landing in Sussex where the Battle of Hastings was fought. Despite his best efforts, William never did conquer Kent, leading the county to adopt the name ‘Invicta’ (meaning undefeated). The motto is still seen today, along with Kent’s white horse, all across the county. At the time, it meant that Kent was seen as a somewhat independent kingdom known as a County Palatine, ruled by Odo of Bayeux (who was actually William’s brother). Kent was awarded special powers, and really ruled itself. It was as special then as it is today.

Over the next 200 years, Canterbury became increasingly important, and was firmly established as a site of pilgrimage after the murder of Thomas Beckett in 1246. The Canterbury Tales (which is also a modern day activity in Canterbury town centre) by Chaucer depicts a group of pilgrims as they travel to Canterbury, each one with a story to tell on the way. It was written between 1387 and 1400, and may never have been entirely completed; Chaucer himself died in 1400.

The medieval period gave rise to the infamous Peasants’ Revolt, led by Wat Tyler who hailed from Dartford. This revolt – and others like it – convinced the lords that they needed better fortifications, and they began to build castles across the county, including the magnificent Dover Castle, Hever Castle, and Leeds Castle. 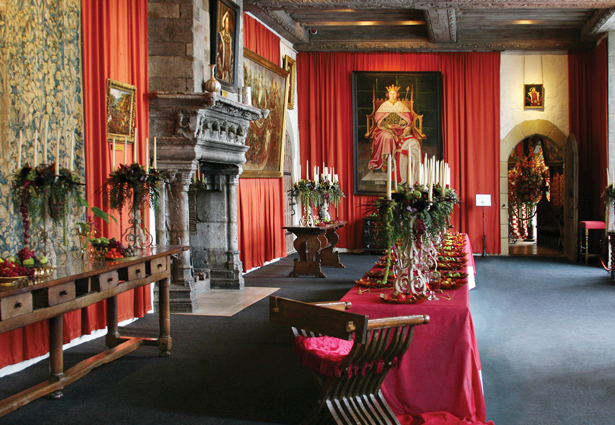 During the 18th century, Kent played a major part in the wars against France, and the dockyard at Chatham was employed as a major naval base, as well as the main shipbuilders in the country. This is where over 400 naval ships were built, one of which was HMS Victory (Nelson’s flagship in the Battle of Trafalgar). Kent was felt to be so important to the war(s) that the first ever Ordnance Survey Map was created based solely on the county, and it was published in 1801 after six years of work.

The Battle of Britain in World War II was fought over the skies of Kent and roughly the same number of bombs fell on Kent as on London (around 2,500), but despite this Kent was the place where Londoners sought safety, and where many evacuated children were sent.

The last big change to occur in Kent was the formation of the Unitary Authority of Medway. It was created in 1998, and includes Rochester, Chatham, Gillingham, and Rainham (this meant that Rochester lost its city status, despite its cathedral).

Since there is so much history linked to the beautiful county of Kent, it’s not surprising that there are numerous sites to visit that will give you more information and let you see first-hand just how incredible the things that happened here were.

The Swanscombe Heritage Park is landscaped across the deposits that contained the important prehistoric finds mentioned earlier. An accessible trail winds through the site; information boards etched into giant granite blocks explain the sequence of deposits and stone pillars show where the skull fragments were found. The site has been designated a Site of Special Scientific Interest (SSSI) and also a National Nature Reserve (NNR).

Evocatively sited amid the East Kent marshes, Richborough is perhaps the most symbolically important of all Roman sites in Britain, witnessing both the beginning and almost the end of Roman rule. Explore the huge stone walls, which mark the site of this Saxon Shore fortress and take a look at the fascinating museum.

Among the most outstanding Roman villa survivals in Britain, Lullingstone provides a unique all-weather family day out. Set in the attractive surroundings of the Darent Valley in Kent, the villa was begun in about AD 100, and developed to suit the tastes and beliefs of successive wealthy owners, reaching its peak of luxury in the mid-fourth century.

Canterbury Cathedral is the Mother Church of the worldwide Anglican Communion and seat of the Archbishop of Canterbury. The cathedral is both a holy place and part of a World Heritage Site.

A visit to Canterbury is not complete without experiencing Chaucer’s famous tales of medieval misadventures at one of the city’s most loved visitor attractions. Experience the sights, sounds, and smells of a bygone era in this fabulous recreation of medieval life – a unique introduction to Canterbury and its famous literary connection.

The most iconic of all English fortresses commanding the gateway to the realm for nine centuries. Climb the Great Tower, meet the characters, and immerse yourself in vivid medieval interiors. Then delve deep within Dover’s White Cliffs to witness the drama in the Secret Wartime Tunnels. Roam through centuries of history at Dover Castle, from the Romans to the Cold War, in an action-packed day out.

Dating back to the 13th century, Hever Castle was once the childhood home of Anne Boleyn, second wife of Henry VIII and Mother of Elizabeth I, and formed the unlikely backdrop to a sequence of tumultuous events that changed the course of Britain’s history, monarchy and religion.

The Historic Dockyard Chatham is a stunning 80-acre site with historic buildings, museum galleries, historic warships and a vibrant programme of events and activities.

The stunning Leeds Castle has frequented many owners since its initial build in 1119. In the 13th century it was favoured by King Edward I, while in the 16th century, Henry VIII used it as a residence for his first wife, Catherine of Aragon. Today, the castle dates mostly from the 19th century (it’s last private owner was Lady Baillie, who redecorated the interior and oversaw exterior and interior alterations) and has been open to the public since 1976.