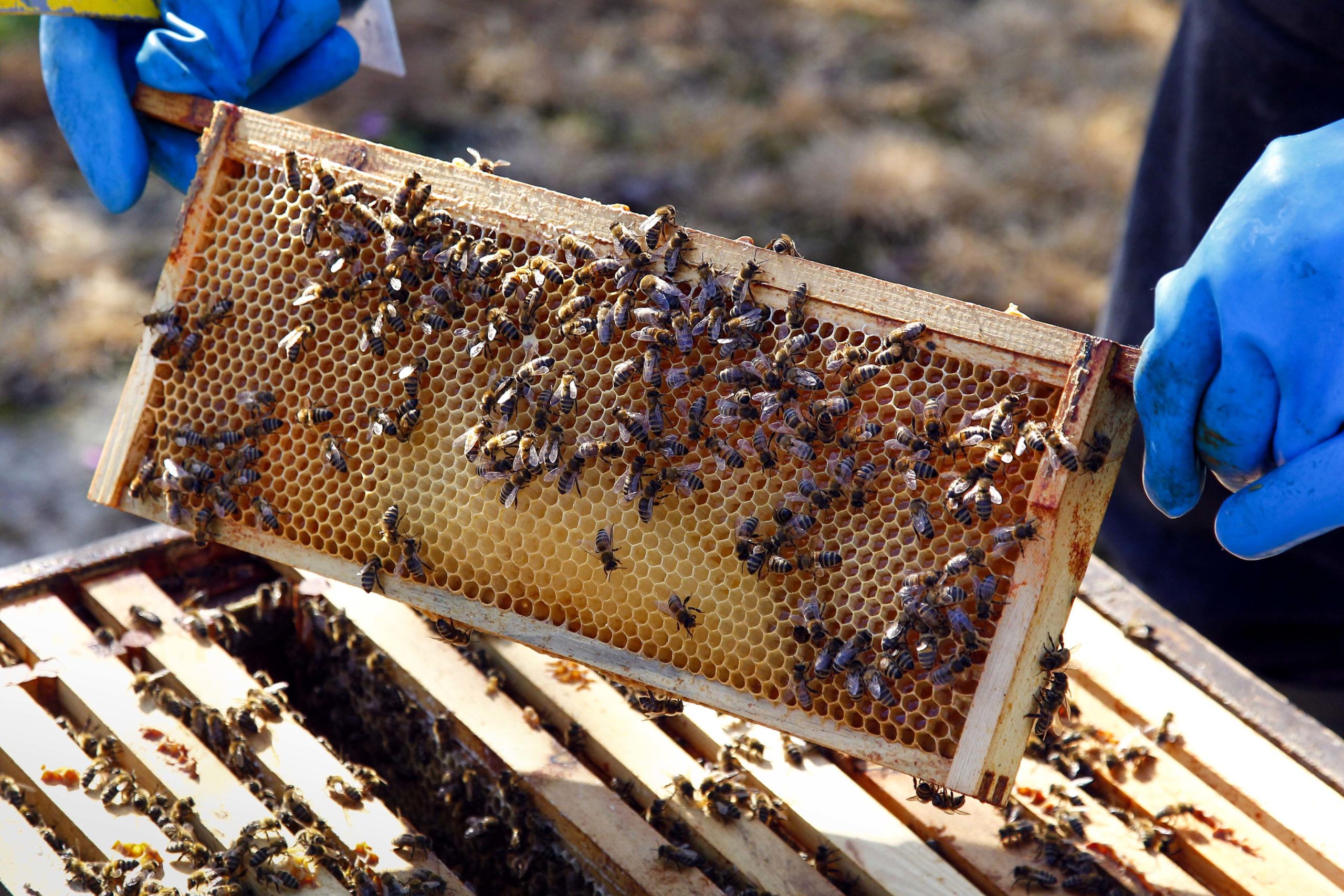 More than 680,000 bees are on a unique spring break at the Hadlow Estate in Kent to help it get the very best from its fruit orchards.

As part of a managed pollination scheme, which is described as a five-star working holiday for the bees, they’re spending their time foraging 80 hectares of sumptuous apple and pear orchards at Hadlow Place Farm, which is located between Golden Green and Tudeley.

Crucial to the success of the annual harvest is the cross pollination of the flowers on the trees, and this is where the bees have a very important role to play in helping to generate thousands of tonnes of fruit each year. Beekeeper Sergio Pignagnoli brings 34 of his hives to the farm and places them around the orchards, before the bees get to work.

Farm Manager Nigel Gibb said: “Pollination is essential in order to generate good crops of fruit. We are very reliant on bees and without them there’s the possibility that you wouldn’t get a very good yield from the orchards. Our fruit trees cannot fertilise themselves and need pollen from different varieties of tree, which is why cross pollination is so important.”

The bees spend around two weeks pollinating the pear trees and then their hives are moved on to the apple orchards for four weeks. The fruit is sold immediately in major supermarkets and to food and drink producers, while some goes into on-site cold stores to provide supplies throughout the autumn and winter months. In a good year, the farm can produce up to 25 million pieces of fruit for sale.

Successful cross pollination is a specialised process, as Nigel explains: “Our main crop is a Conference pear and this is cross-pollinated by Comice pears, which are picked and sold separately. With our apples, the Bramleys are pollinated with Golden Delicious, which are then picked and sold for juice. Also, the Bramley and Gala apples have Malus trees, which produce Crab apples and work as an excellent cross-pollinator. These are grown specifically to produce flowers for the bees.” 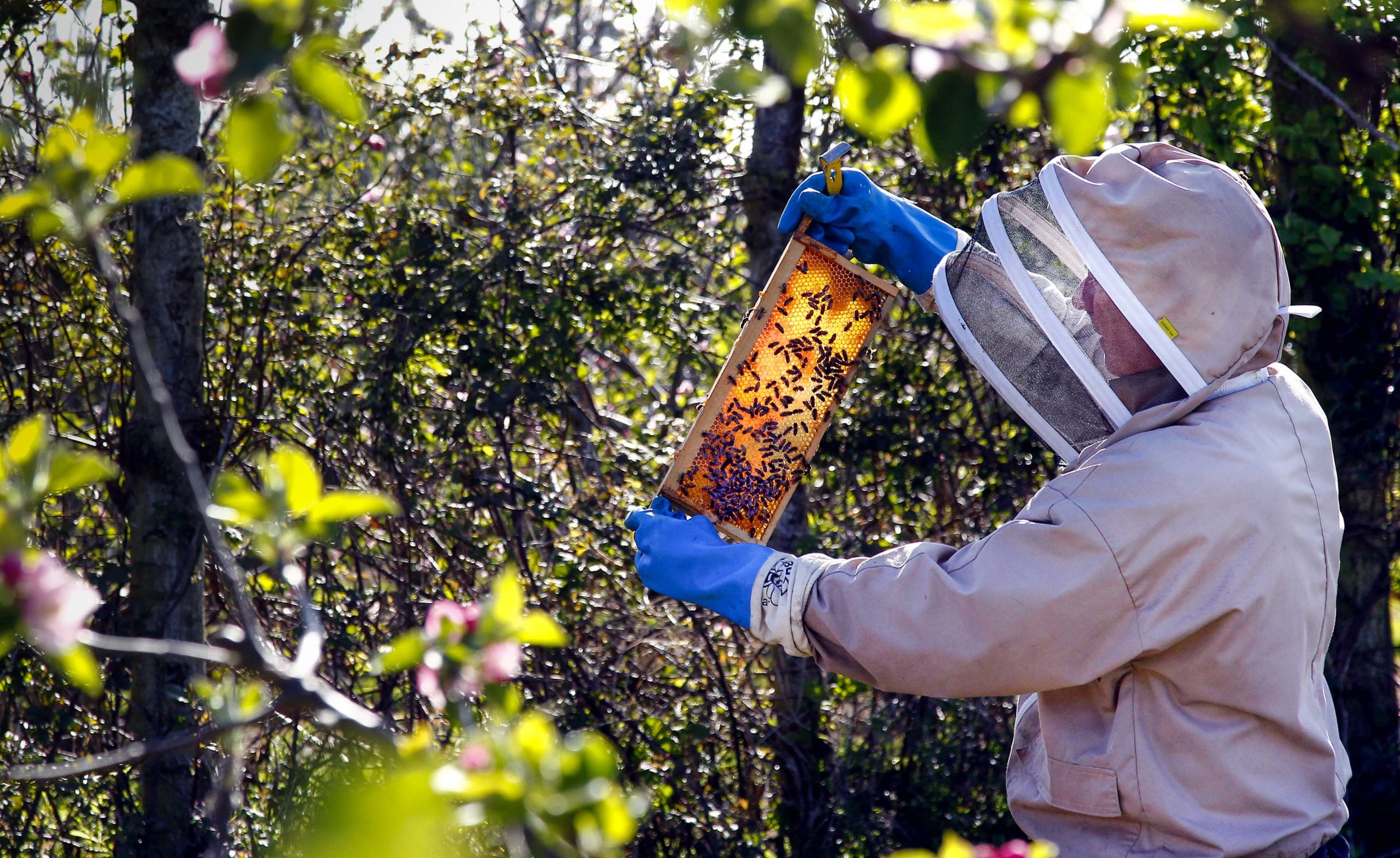 The hives are brought to the farm as part of a national scheme led by the Bee Farmers’ Association, which matches growers with professional beekeepers who are able to meet their needs.

As Sergio Pignagnoli explains, it benefits his bees just as much as it does the orchards. He said: “It really is like a five-star holiday for the bees as there is such an abundance of good quality, fresh pollen and nectar for them to forage. This in turn helps them to feed their young which then expands and strengthens the colony. Each hive will have around 20,000 bees inside it when it arrives at the farm. By the time I collect them, that number will have doubled.”

Surprisingly, the dramatic increase in bee numbers doesn’t always result in more honey. Sergio adds: “Although the hive is growing so much in size, this doesn’t mean they are collecting more nectar. They certainly gather more pollen though, which they use as food. It collects on the backs of their legs on what are known as pollen baskets, and they return with it to the hive.”

Sergio visits weekly to check on the hives and move them if necessary. If he isn’t relocating them within a few feet, he has to take the hives over three miles away to the Estate’s orchards at Tatlingbury, otherwise the bees will navigate their way back to the exact place where the hive was initially placed.

The project has been running for many years. Kate Teacher, of the Hadlow Estate, said: “Bees and orchards have been working together for hundreds of years and we have continued that tradition by bringing a bee farmer here each year. We really do rely on them as without the bees our yields of fruit would be much lower – the native wild population of bees and other insects would not be enough to ensure a high quality, sustainable crop. I have been lucky enough to watch Sergio checking on the hives and his bees, and it is fascinating to see the care and understanding he has for them. It really does go to show how the cycle of nature and how the production of food from farming carries on, despite everything we are facing at this time, and people are working hard to make it happen. That is something very special indeed.” 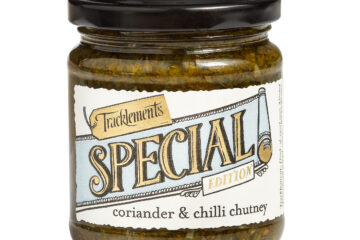