Well-known Kent family butcher, JC Rook & Sons, has been named the winner of the UK Best Sausage in the Champion of Champions 2016 competition.

The winning sausage, ‘Grandad’s Recipe Pork & Sage’, overcame competition from 20 other competition-winning sausages from across the country to be crowned winner at an event held in London’s St Bart’s Brewery on Monday 10 October.

A team of industry professionals from; the Institute of Meat, National Federation of Meat and Food Traders, Agriculture & Horticulture Development Board’s (AHDB) and independent meat experts and journalists spent a morning choosing the winning sausage.

Keith Fisher, chief executive of the Institute of Meat said, “The winning sausage was well put together, it was well filled, well linked – there were no cavities or air pockets, and there was a fresh herby flavour that came through, which makes it stand out from the crowd.” 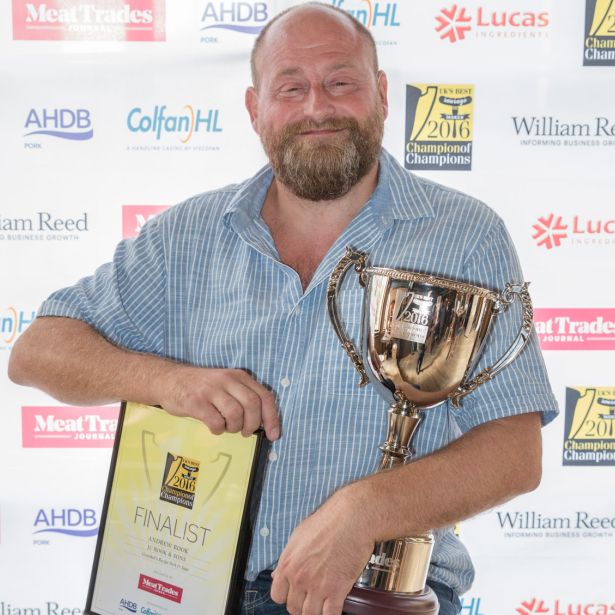 Andrew Rook, who produced the winning sausage, said that being crowned the overall winner was, “a sensational feeling as this was genuinely my grandad’s recipe and we are absolutely delighted that a recipe that was developed in the 1930’s from a 1912 recipe, and sold through our shops since 1965, has gone on to become an award winning recipe. Winning this competition has created such a buzz within our shops and has certainly increased staff morale.”

The winning product was also praised by independent consultant, Fred A’Court, who said: “In most years there’s usually an extended debate among the judges about which is the best sausage before a decision is reached, but this year the winner was clearly ahead of the others and the decision quickly reached.

JC Rook and Sons is a certified Master Butcher (accredited in 2013) that has been trading in Kent for over 50 years.  They have over 11 shops operating throughout East and Mid Kent with their own Food Standards Agency approved production and distribution facility in Ramsgate. They also supply food services to restaurants, cafes, schools, nursing homes, hotels and pubs and employ over 200 hundred people.