Aren’t we the lucky ones here in Kent? Amongst the UK’s incredible range of beaches, the Kent coast boasts some of the very best. Not so long ago, our beautiful coastline was the summer holiday of choice for many Londoners, and, thanks to the ever-present spectacular scenery and excellent amenities, those long, carefree holidays are still enjoyed today. Kent’s beaches never get old, they never get boring, and they always welcome newcomers and return visitors with equal pleasure. 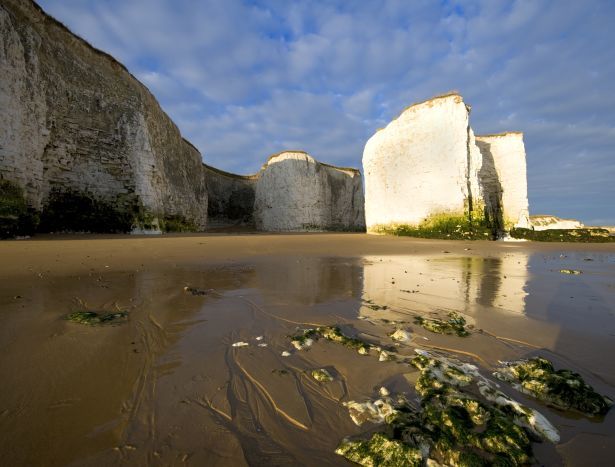 Winner of a Blue Flag Award for 2016, Botany Bay is a haven for families, explorers, photographers and those looking for somewhere peaceful and serene to relax for a day – or more. Tucked away between beautiful chalk stacks, this tranquil beach is said to have been given its rather wonderful name due to the many smugglers in the area. If they were caught (as they often were), the sentence was transportation, and the landing place in Australia was called Botany Bay.

The sandy beach at Botany Bay is an excellent place for fossil hunting when the tide is out, and there are plenty of rock pools around that will give children and adults alike many a happy hour of exploration.

Amenities include a nearby café and pub, deckchair hire, seasonal toilets, seasonal lifeguards, and a first aid point. Dogs are not allowed on the beach between 10am and 6pm from 1st May until 30th September. 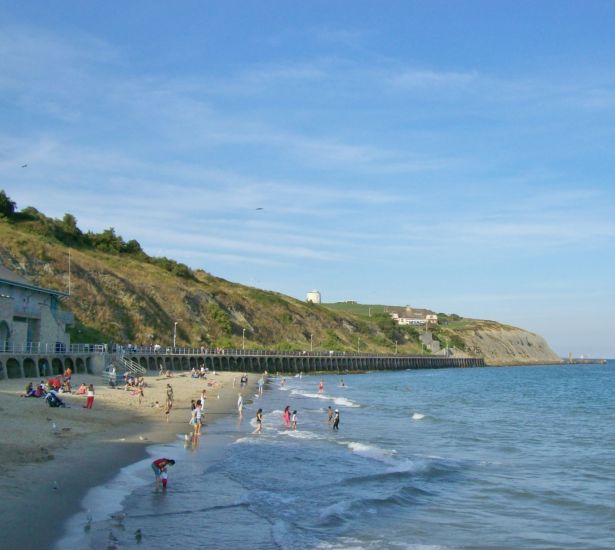 Sunny Sands has the distinction of being one of the very few sandy beaches that can be found within an hour’s travel of London – a rare thing indeed. And although that can mean that Sunny Sands itself can get fairly busy on nice days, that shouldn’t put you off from visiting – especially if you or the kids love to build sandcastles. There is an annual sand castle building competition that takes place here, which is testament to just how perfect the golden sand actually is.

Located next to Folkestone harbour, there are plenty of amenities here that mean your day out can be one of completely uninterrupted enjoyment. There are cafés, restaurants and pubs within walking distance, including fish and chip shops and the Pleasure Beach café. There are toilets too, as well as a fun gift shop. Parking is easy and convenient with two long term car parks close to the beach itself and another a short walk away. 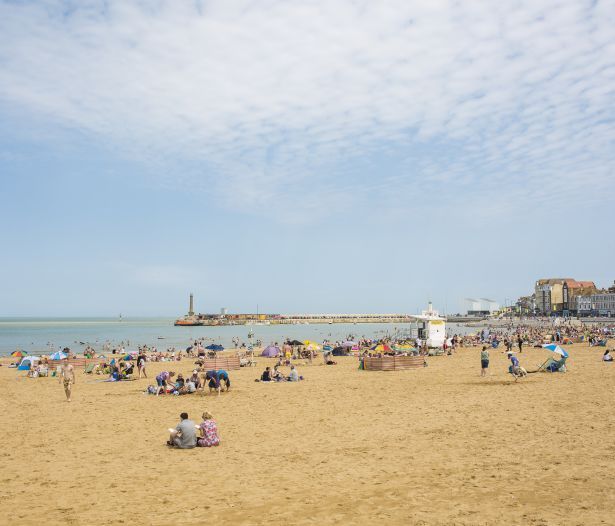 Margate is a fantastic seaside town, and the epitome of the great British summer holiday with its quirky gift shops, fantastic restaurants, fresh fish stalls and promenade stores selling buckets and spades and beach balls. The beach itself – Margate Main Sands – is a wide, sweeping sandy bay that is popular but that never feels too busy thanks to its generous size. The beach has a tidal pool that offers wonderful opportunities to paddle and swim, and, unlike many beaches, when the tide is in there is still plenty of sand left to play in and on.

Just a short stroll down the sands is a children’s fairground with many rides to play on, as well as a number of amusement arcades for when it’s time to get out of the sun. Walking in the opposite direction will take you to Turner Contemporary, the world-renowned art gallery. 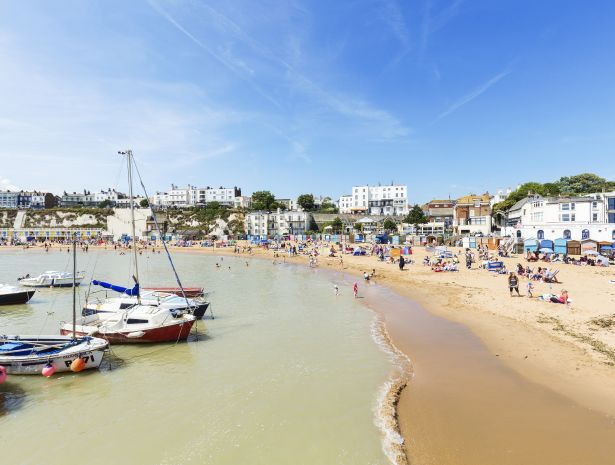 Viking Bay is one of the (many) things that Thanet’s Broadstairs is famous for. In fact, this is where Charles Dickens himself used to spend his holidays, and he wrote an essay on it called “Our English Watering Place” in which he explained why it was such a perfect place. To be fair, Dickens didn’t really have to write it down (although we’re glad he did, as it’s a lovely piece of writing); Viking Bay’s plus points speak for themselves. This long sandy bay has both a vintage boardwalk and a cliff-top promenade as well as a family-friendly tidal pool and children’s rides to try out.

Viking Bay also has a surf school through which you can book (from March until October) to learn how to surf, ski, and use belly boards. For those who prefer to enjoy their beaches from a stationary position, there are deckchairs and loungers available for hire.

There is plenty of nearby parking, toilets and a number of different options for food including various cafés and bars, so you really can spend all day out on the sand and go home feeling happy and with some great seaside memories. 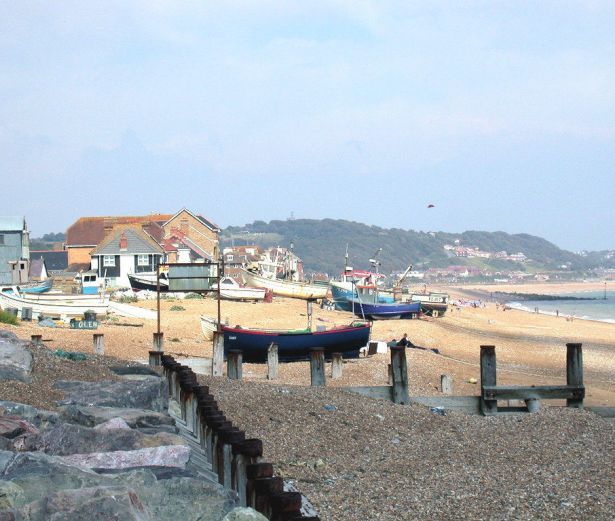 Hythe Beach is actually three different pebble beaches joined together. They consist of the main beach itself, Fisherman’s Beach and Foreshore Beach. Fisherman’s Beach, as the name suggests, is a real working beach with plenty of fishing boats and fishermen using it at all times. Rather wonderfully, this is where you can find the Fishmongers’ Café which sells the catch of the day – and it doesn’t get fresher than having been brought to shore within metres of the café itself. Foreshore Beach is sometimes closed as it is close to the MOD Hythe firing range. When the range is active, the beach is closed to the public, but when it is open it is part of a lovely walk that takes you all the way to Tankerton.

Hythe Beach is accessible by steps or via concrete slopes, and it is split into zones depending on what it is you want to do there – there is a swimming area, and a boat launch area. And if you want to launch a personal craft you can do so at the fabulously named Smuggler’s Slipway.

Hythe Beach has a number of different car parks within a short walk, as well as a café and restaurant. The toilets at Hythe are open from Easter until October. 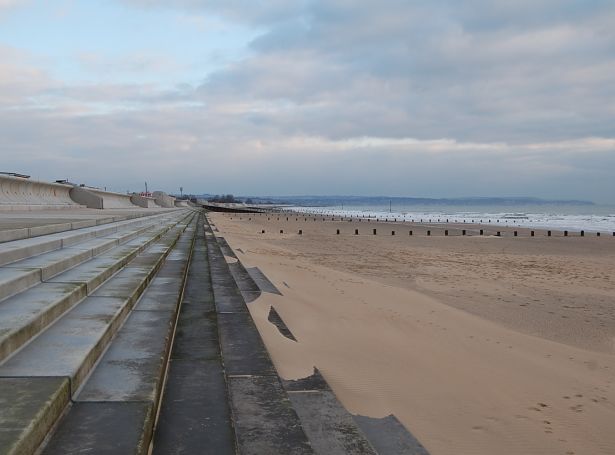 Dymchurch’s lovely wide sandy beach is the ideal spot to take some time to yourself to unwind, or to take the family for a fun, traditional day out on Kent’s spectacular coast. Perhaps the most famous element of Dymchurch Beach – certainly the one that seems to be most well remembered by visitors past and present – are the donkey rides, and they are still there for everyone to enjoy today. Since the beach is flat and stretches for over three miles it is the most wonderful and safe place for children to play in the golden sands, for sunbathing, and for swimming. And since the beach is so close to Dymchurch itself, there is a good choice of places to be entertained and to eat – you can even bring your own picnic if you prefer.

Plus, if sea fishing is something you’re particularly keen on, Dymchurch’s reputation as the best beach on the south coast for that sport is well deserved; find out more from the Dymchurch and District Sea Angling Club. 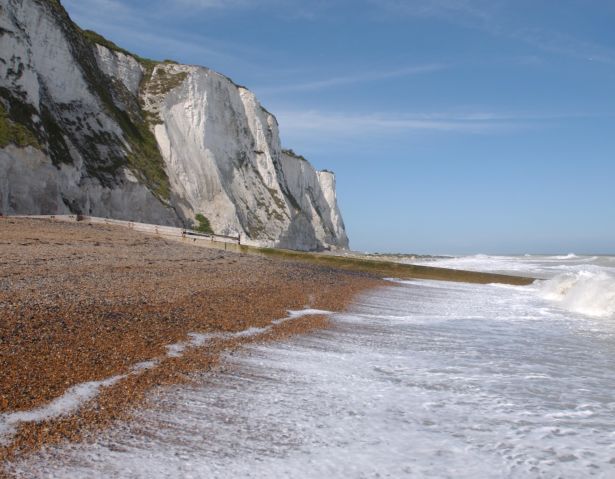 St Margaret’s Bay near Dover is a pretty little shingle beach that is absolutely ideal for rockpooling. It’s also a great place to enjoy some watersports, so whether you prefer to sit and relax in the sunshine or to get out there and enjoy the sea itself, you’re in the right place. St Margaret’s is found in White Cliffs country, and as such it has some fascinating and far-reaching history behind it. It is even mentioned in the Domesday Book (although it was called Sancta Margharita back then). It has been a popular holiday destination since the Victorians realised how lovely it was, and none other than James Bond creator Ian Fleming could also see its numerous charms.

Dogs are allowed on the beach at St Margaret’s Bay which is something of a rarity on Kent’s beaches during the summer months, and there are bins dotted around to help owners keep the shingle clean. Walking up from the beach along the coastal path brings you to a café which used to be the old coastguard station, and the views from there are stunning. 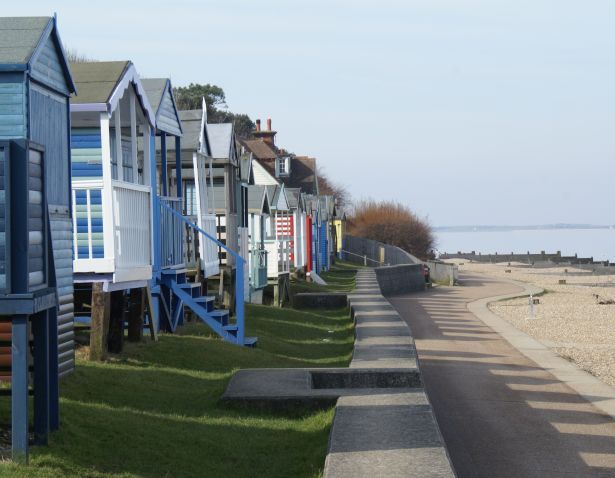 This gorgeous pebbly beach is divided into section by groynes, giving it the look and feel of a truly traditional British beach. Which it is. Backing onto the beach itself is a lovely row of cottages (Martine Terrace) which is both iconic and nostalgic. There are beach huts here too, all of which evoke a sense of summer’s past; it’s just a lovely place to be. You can enjoy sailing and wind surfing here, and there are numerous cafés, bars and restaurants just a short walk away in the town centre itself.