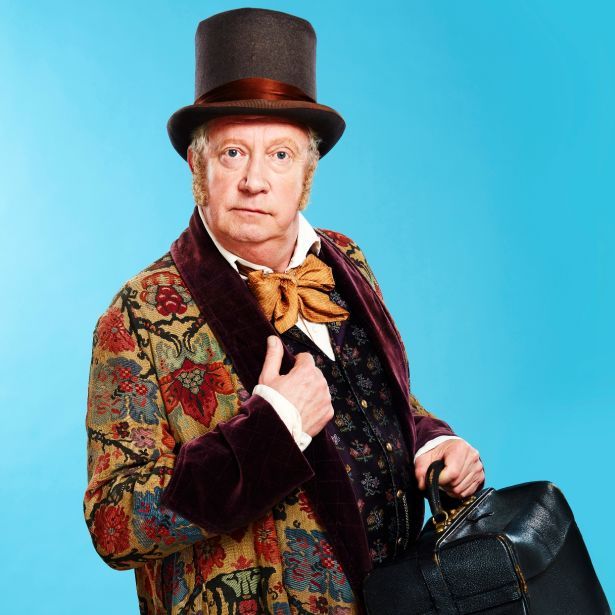 Mark Williams, star of The Fast Show, Father Brown, 101 Dalmatians, The Borrowers, Shakespeare in Love and seven of the Harry Potter films, will star as Doctor Dolittle at the first ten venues of the new UK & Ireland Tour of Doctor Dolittle, with book, music and lyrics by double Academy Award-winner Leslie Bricusse.  Featuring stunning visual puppetry, this new production, with the book reworked by Leslie Bricusse, will be part of the 50th anniversary celebrations of the original film starring Rex Harrison and will feature the same songs, including the Academy Award-winning Talk To The Animals.

Mark Williams’s many theatre credits include Fanshen at the National Theatre, Doctor of Honour for Cheek by Jowl, Moscow Gold, Singer, A Dream of People and As You Like It for the Royal Shakespeare Company, Art in the West End, Toast at the Royal Court and Tartuffe at the Birmingham Repertory Theatre.

Eccentric Doctor Dolittle embarks on an extraordinary adventure to find the Giant Pink Sea Snail that holds the secret of life and makes the world a happier place. Helped by his human companions and an exotic menagerie of animal friends, including the Pushmi-Pullyu and trusty sidekick Polynesia the parrot, the larger-than-life Doctor Dolittle teaches us not only to talk to the animals but to listen to them as well!

Leslie Bricusse has written the book, music and/or lyrics for more than 40 musical films and plays.  Stage musicals include Stop the World – I Want to Get Off, Pickwick, Harvey, Goodbye, Mr Chips, Scrooge and Victor/Victoria, while films (songs and/or screenplays) include Scrooge, Willy Wonka and the Chocolate Factory, Goodbye, Mr Chips, Superman, Victor/Victoria, Home Alone 1 & 2, Hook, Goldfinger, You Only Live Twice, The Last Emperor and various Pink Panthers.  His songs include What Kind of Fool Am I?, My Old Man’s A Dustman, Goldfinger, You Only Live Twice, On A Wonderful Day Like Today, The Candy Man and Oompa-Loompa-Doompa-Dee-Doo.  As well as winning two Oscars, he has won a Grammy and eight Ivor Novello Awards.

The new stage production of Doctor Dolittle will be directed by Christopher Renshaw (Le Grand Mort, Zorro, Taboo, We Will Rock You, The King and I), with design by Tom Piper (Associate Designer at the RSC from 2004  to 2014, and designed the installation for the Tower of London poppies installation and subsequent tours – original concept and Poppies by Paul Cummins), and musical supervision by Mike Dixon (most recent theatre includes Mrs Henderson Presents, Oh What A Lovely War, Bodyguard, Taboo, Hair, Zorro, Never Forget and We Will Rock You).