The Vicar’s Picnic has announced the funkiest Dance Tent line-up in the festival’s history, curated by Ibiza’s Mr Doris and featuring some of the greatest names ever to spin a record, led by a legendary headliner!

Norman Jay MBE is unquestionably one of the most respected and popular DJs in the world today. Co-founder of the legendary Good Times Sound System and London dance music station KISS FM, Jay fostered the ‘Rare Groove’ scene pushing the boundaries of the UK’s emerging club culture. Awarded an MBE for services to deejaying and music, he will be taking his legendary Good Times party to The Vicar’s Picnic, continuing to convert championing new sounds and convert generations of new clubbers to the cause of ‘Good Times’. 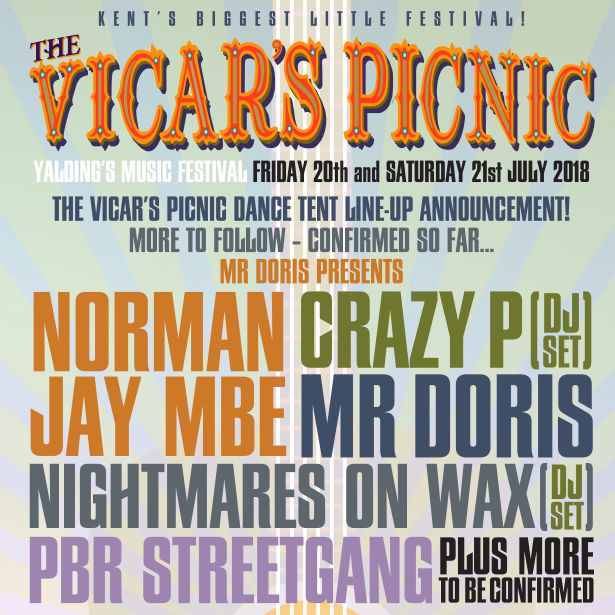 After seven albums and a career spanning over 20 years, Crazy P remain stronger and more relevant than ever. Regarded as one of dance music’s finest and genuinely live, performers out there, Crazy P have managed to both uphold the heritage of soul, musicianship and songwriting that is an essential part of the fabric of house and disco.

Nightmares On Wax trademark stamp is evident; rhythms infectious in their simplicity, blues-infused time signatures overlaid by Quincy Jones-esque synth lines and the inherent fusion of relaxed dub, hallucinogenic hip hop and Balearic melodies. became one of the brightest spots on the post-rave British techno map of the early ’90s.

Award-winning DJ and producer Mr Doris’ incredible turntable talents fuse his influences of jazz, hip hop, funk and soul with the modern genres of house and future disco. These skills combined with his unwavering passion for music and performance led industry leaders to recently name him Best Ibiza DJ in the International DJ Awards.

PBR Steetgang have a trademark production style that utilises their love of a body shaking baseline, crisp beats, quirky samples and a unifying groove. Their unique musical approach never fails to connect with the crowd and their DJ partnership has evolved into audience enthralling sets.

With further Dance artists yet to be announced alongside a main stage line-up that includes Fun Loving Criminals, Starsailor and Cast, The Vicar’s Picnic will run for two days on July 20 and 21 on the outskirts of the village of Yalding, Kent.

Tickets are once again expected to sell out in advance of the event – all the early bird tickets have already been snapped up – so early booking is advisable. Tickets are available from www.vicarspicnic.co.uk.

Festival founder and creative director Dave King said: “We are proud to be a true festival – like Glastonbury, built from the ground up. This year’s line-up is a dream come true.”

The festival started six years ago with a group of friends getting some bands together in a back garden, since which time it has swelled to a sell-out 4,000-strong festival, with camping and glamping, a kids’ zone, creative quarter and full-blown festival facilities – all organised by unpaid volunteers, whilst employing the best in professional production.

This year’s festival will support the local charities Dandelion Time and the Kenward Trust.