Snow White at The Assembly Hall Is A Proper Panto – Oh Yes It Is!

There is nothing quite as traditionally Christmassy as a proper panto. What’s a proper panto? It’s one with a handsome prince, a pretty heroine, a horrible baddie, a hilarious dame, a lovelorn best friend, loads of silly songs, plenty of slapstick comedy, and a few jokes just for the mums and dads thrown in for good measure.

And that’s exactly what you get with Snow White & The Seven Dwarfs at the Assembly Hall Theatre in Tunbridge Wells. 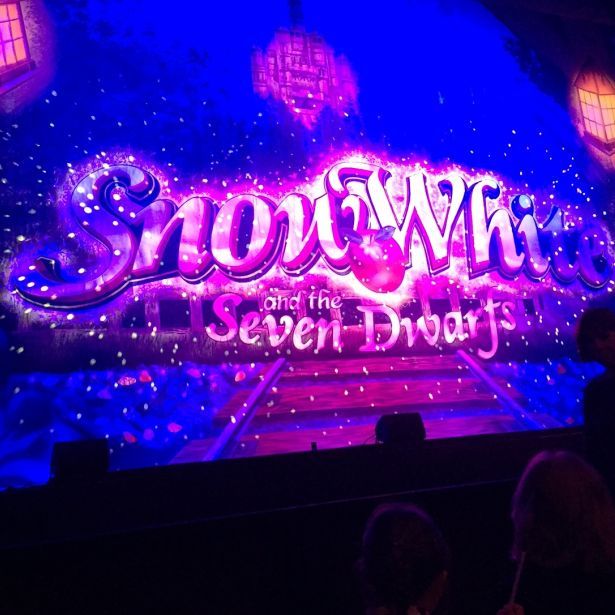 From the opening village scene dance number to the final stunning wedding (of course), this pantomime is a laugh-a-minute festive treat of a show – it ticks all the boxes and then some.

When it comes to a good panto, the cast is all-important. In Snow White & The Seven Dwarfs we have some of the best. Su Pollard as the wicked queen stands out as being one of the funniest, evilest baddies I’ve seen on stage for a long time – with a variety of dresses that have to be seen to be believed (and remember, ‘Don’t touch the frock; leave the frock alone!’) and some rather interesting wigs, she has a presence that captivates. Little children love her, despite the fact that she attempts to murder the lovely Snow White, because she really does have a star quality that shines through. It takes someone special to be a good baddie, and Su Pollard is that person. From her magnificent opening number through to her comeuppance, she is thrillingly good value.

Jamie Rickers as Muddles, the best friend who is in love with Snow White, and Jamie Steen as Nurse Dolly are a formidable pair. If you thought the wicked queen’s outfits were… different, then wait until Nurse Dolly appears. Every time she is on stage she is in a different costume, and they range from the ridiculous to the unbelievable. There is, indeed, nothing like a dame, and Steen offers up a clever, lovable one for all ages. Muddles’ humour is a lot more slapstick and a lot less visual, but that doesn’t mean the audience doesn’t lap it up and call out for more. M-U-D-D-L-E-S, I say ‘Muddles’ you say ‘yes’ will be sticking around in your head long after the final curtain.

As for Snow White herself, Millie Booth manages to be both charming and vulnerable, and there is something about her sweetness that means we’re rooting for her even though we all kind of love the wicked queen to bits. A gorgeous singing voice adds to the magic.

Chris Warner Drake is the prince. And what a prince. He’s funny, good looking, and he sings. It’s no wonder that Snow White fell for him instantly, not to mention the fact that the queen decides to go after him too. Including him in the obligatory (and always funny) ghost scene is a genius move that takes the prince from caricature to character in an instant.

The set in many pantomimes is flat and boring, but not so in Snow White. This is the first time I’ve ever witnessed a set piece be applauded, but that spontaneous approval was not out of place when the dwarfs’ cottage opens up to reveal its perfectly appointed interior. This – and the rest of the set – makes the show even more enjoyable. There is no worry that anything is going to topple over – it all feels incredibly professional.

If you are looking for a pantomime that has something for everyone, and that the little ones (and perhaps the big ones too) will be talking about for weeks to come, book to see Snow White & The Seven Dwarfs at the Assembly Hall, Tunbridge Wells. You won’t regret it.

More time to shop this Christmas at Bluewater

Snow White at The Assembly Hall Is A Proper Panto – Oh Yes It Is!