The 39 Steps at The Orchard Theatre 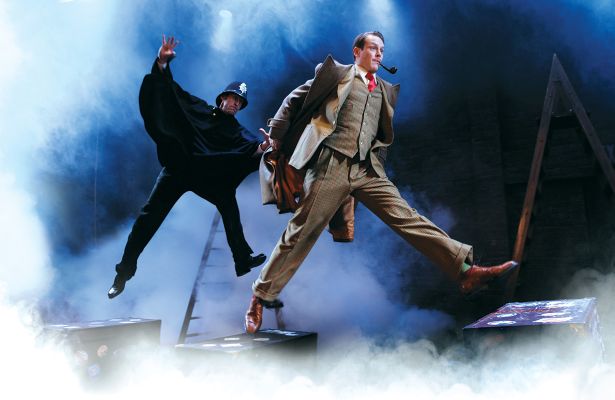 Running at The Orchard Theatre in Dartford until 6th February, this gem of a play has something for everyone. A comedy spy story, based on the John Buchan novel and Hitchcock movie, there are 139 characters played by four actors – quite a feat, and one that could have gone badly wrong. Thanks, however, to the superb acting skills of the small but perfectly formed cast (Richard Ede as Hanney, Olivia Greene as Pamela, Annabella and Margaret, Rob Witcomb as Man 1, and Andrew Hodges as Man 2), each character was completely distinct from the next, allowing truly magnificent performances from everyone to play out on the stage.

The story is part spy thriller part romance, all comedy. From the initial murder for which the ‘victim’ must have had the most incredible strength to stay in the position they died in for that length of time (really, I know I wouldn’t have been able to do it!) to the final shooting (just where did that arm come from?) the suspense was kept up, and yet the comedy moments which could easily have detracted from the actual storyline only enhanced it all.

There were big laugh out loud moments, purposefully wobbly props, hilarious uses of hats, amazing accents, and one quite astounding feat of memory that caused the audience to erupt into spontaneous applause. There were also some fabulous references to the master himself, Hitchcock – it became a game of how many film titles can you spot? Oh, and watch out for the shower scene…

To book tickets (and we heartily recommend that you do) visit www.orchardtheatre.co.uk

Are you ‘cool’ enough to be a “sub-zero science hero” in Doc. Yard’s Secret Lab?

Roses Are Red, Violets Are Blue, Next Lingerie Collection Is Perfect For You!

The 39 Steps at The Orchard Theatre