The National Commemoration of the 75th Anniversary of the Evacuation of Dunkirk (Codenamed Operation Dynamo) will  take place in Ramsgate and Margate in Kent from 20th-25th May ’15 with the Guests of Honour being a number of survivors of the event, as well as over 60 Dunkirk Little Ships.

Church Service followed by a Military Parade around Ramsgate Royal Harbour and the opportunity to see over 60 Little Ships from the West Pier.

At approximately 8am (depending on the tide), the Little Ships will leave Ramsgate Royal Harbour and sail to Dunkirk. They will be piped out by a military piper and accompanied by the Royal Navy and RNLI. Subject to weather, there will be a flypast by the BBMF Spitfire and Hurricane to pay tribute. Crowds lining the East and West Pier are needed to cheer them off!

Noon, 2pm and 4pm: 1940s Tea Dances with demonstration dancers and some great music. Tickets must be bought in advance and are on sale at www.operationdynamo75th.co.uk or by ringing 01843 230779.

There will be lots happening with the Dynamo Museum, the Ramsgate Tunnels, the Spitfire and Hurricane Museum, and the Ramsgate Maritime Museum. The RNLI will have a lovely display entitled “Dunkirk – the Lifeboats’ Story” with a gorgeous view of the Harbour thrown in, mini tanks on the beach, a traditional funfair, a 1940’s Homefront Bus, and a community stage with some great local acts as well. In addition, the P&O Choir and a choir called Vox Pop all the way from the Isle of Wight will be present, plus there will lots of re-enactors. There is also a once-in-a-lifetime chance to board the Medway Queen, the “Heroine of Dunkirk” at Ramsgate as she will be berthed on the Commercial Quay and  ‘selling 7,000 soldiers to raise money for her further restoration, a handmade fair on the Commercial Quay, some lovely vintage cars and more. It should be fun!

At approximately 2pm, a smaller number of Little Ships will return to Ramsgate Royal Harbour; a parachute flare will warn us when the Little Ships are about a half hour out of Harbour. Everyone will be encouraged to line up on the East and West Pier to welcome them home waving and cheering with the 2433 Sqn (Ramsgate) Air Training Corps Band playing their hearts out (Union Flags are available to buy in local shops). Updates on timings will be announced on social media, the Community Stage and the PA system in the Harbour area. The Kent Spitfire will welcome them home.

Further details are available at www.operationdynamo75th.co.uk or call Angie Sutton on 01843 230779. 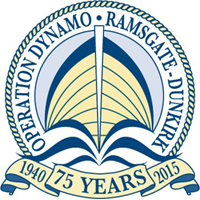