THE ROYAL Shakespeare Company bring A Midsummer Night’s Dream to The Marlowe Theatre, Canterbury, next month 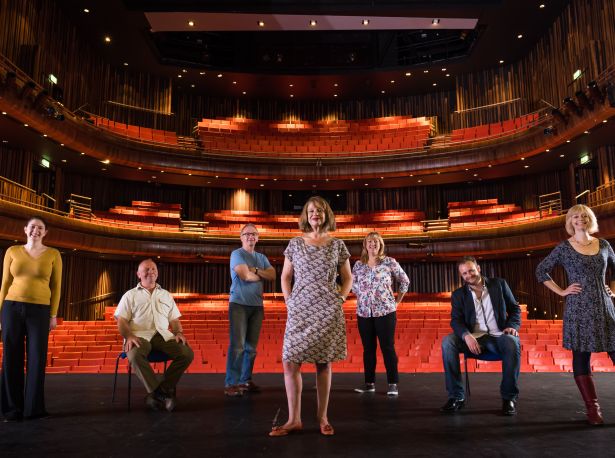 The national tour marks the 400th anniversary of Shakespeare’s death and visits every region and nation of the UK. In each area, the 18-strong professional company will joined by local amateur companies who will play the Mechanicals, and schoolchildren who will form part of Titania’s fairy train. At The Marlowe, members of the Canterbury Players will take to the stage, joined by pupils from King Ethelbert School, Birchington.

This magical new production of one of Shakespeare’s most beloved comedies is set on a midsummer night when four loves find themselves wrapped in the mischievous arms of an enchanted forest where sprites lurk and fairies rule.

Leading the professional cast is Ayesha Dharker, who takes on the celebrated role of Titania, Queen of the Fairies. Last year, Ayesha played the role of Emilia in the RSC’s critically-acclaimed production of Othello, having previously played Scheherazade in Arabian Nights.

Most recently she appeared in Tanika Gupta’s Anita And Me at The Birmingham Rep and Theatre Royal Stratford East. Other theatre credits include the Broadway and West End production of Bombay Dreams. Her film credits include Star Wars Episode II: Attack of the Clones, The Mistress of Spices, with numerous TV credits including Arabian Nights, Doctor Who, The Indian Doctor and Waterloo Road.

Ayesha said: “I am delighted to be playing Titania for The Dream! I have fallen in love with the RSC because every project I have done with them involves strong women and magical stories with ancient roots – from Scheherazade to Titania. I am looking forward to working with talented actors from all over the country and cannot wait to work with Erica Whyman [the RSC’s Deputy Artistic Director and Director of A Midsummer Night’s Dream].”

Erica Whyman said: “I am thrilled by the professional acting company and the creative team we have brought together. They are hugely talented and offer me a wonderfully wide range of expertise so I’m looking forward very much to getting into rehearsals and responding to this magical play. They also all have big hearts and will rise to the unique challenge of this project with skill and generosity.”

A Midsummer Night’s Dream is designed by Tom Piper who is best known for his collaboration with Paul Cummins and The Tower of London on the commemorative poppy installation, Blood Swept Lands And Seas Of Red. The lighting is designed by Charles Balfour; the composer is Samuel Kenyon (who both worked with Erica Whyman on the 2014 production of The Christmas Truce). Movement is by Siân Williams and the Associate Directors are Kimberley Sykes and Sophie Ivatts.

The 84 amateur performers playing the Mechanicals have been taking part in workshops and tasks set by the RSC team in preparation for the start of rehearsals throughout the autumn.

Sally Elkerton, Director of the Canterbury Players, said: “After over a year of involvement with the RSC Dream 16 project, seven members of Canterbury Players’ are becoming increasingly excited as performance dates at The Marlowe Theatre draw near. In the last months they have worked with some of Britain’s top theatre practitioners, learning new approaches to acting and techniques that keep performances fresh, lively and engaging.

“It has been a wonderful, challenging and rewarding process and audiences in Canterbury will soon be able to see the result of their work.”

The BBC will be capturing all of the action of the tour in The Best Bottoms In the Land, which will follow the RSC’s journey as they put on the production with both amateur and professional actors. Nine regional programmes will be produced,  including the south east, and will be aired late spring.

A Midsummer Night’s Dream is at The Marlowe Theatre at 7.30pm from Tuesday 19 to Saturday 23 April, with 1.30pm matinees on the Thursday and Saturday. Tickets, priced from £14.50 to £33.50 (concessions available; booking fee applies) are from the Box Office on 01227 787787 or at marlowetheatre.com. There will be audio described, captioned and signed performances; go to the website for full details.

Hetty Feather at The Orchard Theatre

THE ROYAL Shakespeare Company bring A Midsummer Night’s Dream to The Marlowe Theatre, Canterbury, next month