Who doesn’t love a whodunnit? There is something innately exciting about the vicarious thrill of watching a (well acted) murder take place, and then trying to piece together the clues before the actors finally let their audience in on the secret. And that’s why murder mysteries have such an enduring appeal – that’s why the ‘queen of crime’, Agatha Christie, is still so popular over 40 years after her death.

A Murder Is Announced always has been one of Christie’s more popular mysteries, featuring the doughty and irrepressible Miss Marple as the amateur sleuth who knits together the various strands of the story to present a whole that (most) people won’t have been expecting. Clues are there, but they are subtle, and even when you do spot one, understanding its place in the story is another matter altogether. 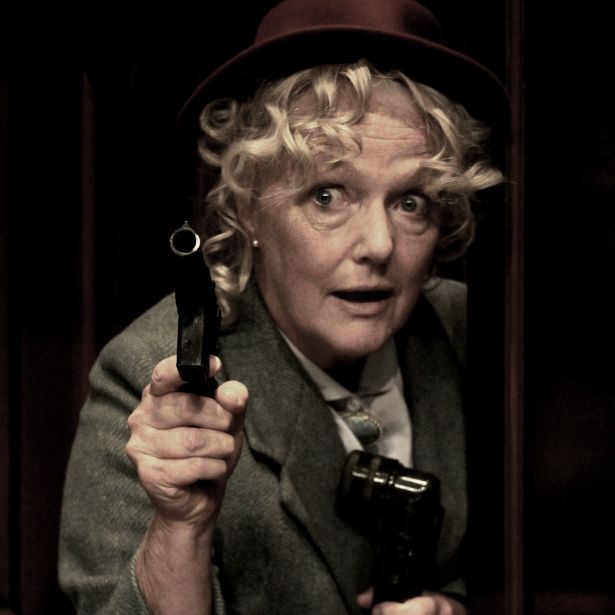 An Agatha Christie play is something completely different to a television programme, where clues can be inserted into specific shots, pointing the audience in the right direction. This is why, I think, a play such as A Murder Is Announced will always be a fun watch; there is no pointing out, there is no helping – if you want to solve the murder, you need to be taking note and paying attention. In this version, skillfully directed by Michael Lunney and adapted for the stage by Leslie Darbon, the clues really are there and when the plot is explained by Miss Marple, you will find yourself nodding along with the story. Because of course that’s what that meant! Of course that’s why she said that! Now it all makes sense…

Even for those who already know the story of A Murder Is Announced, this play is a lot of fun. With insider knowledge, those clues are much easier to spot, but that does not detract from the enjoyment of the whole thing. Adding everything up, making sure that it makes sense… that’s just as exciting as trying to work the mystery out from scratch.

The one problem with watching an Agatha Christie play on the stage when it has been successfully adapted for television (numerous times) is that it can sometimes feel like a live action carbon copy of what has gone before. Not so with this production. Louise Jameson (EastEnders, Doctor Who, Doc Martin and much more) portrays Miss Marple with a twinkle in her eye and a spritely manner that immediately makes the audience warm to this rather interfering (although when you’ve got her skills of detection it’s all to the good) little old lady. She is funny. She is charming. And she is very, very clever. 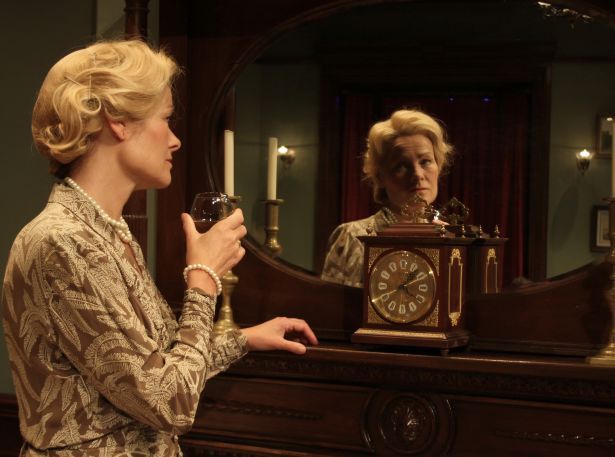 And the rest of the cast is just as interesting. Janet Dibley’s (The Two of Us, Fat Friends, Broadchurch) portrayal of Lettie Blacklock is at once both stern and loving. It shows two different sides of a character who could otherwise come across as rather stiff and stuffy. And Sarah Thomas (Last of the Summer Wine, Doctors, Heartbeat) as Dora ‘Bunny’ Bunner is a joy. So sweet and innocent, this character could easily be a caricature of a forgetful old woman, but that’s not what we have in this adaptation of A Murder Is Announced. Instead we have someone who could easily be absolutely real – and our sympathy for her is real.

Final mention must go to Tom Butcher who plays Inspector Craddock. Often in amateur detective stories we find that the police are represented as bumbling fools who couldn’t solve a murder if they had witnessed it happening… but not so for Craddock who is portrayed skillfully as a man who understands how the world works. Instead of fighting against Miss Marple, the pair play off one another, making their interactions amusing and plot progressing.

A Murder is Announced is a highly enjoyable mystery that will have you guessing to the end. It plays at Dartford’s Orchard Theatre until 19th August, and tickets can be purchased here: https://orchardtheatre.co.uk/Online/default.asp?doWork::WScontent::loadArticle=Load&BOparam::WScontent::loadArticle::article_id=19FD1A97-61DB-465C-BA4F-30C54F0C821C