It’s not a job I would relish.

Getting it wrong would be a disaster, a disappointment to fans across the generations.

Thankfully, in Fantastic Mr Fox the musical currently playing at The Orchard Theatre, Dartford until 5th March, the writers have got it spot on. It’s a wild and wacky, sometimes scary, always silly telling of Dahl’s story, which stays true to the original whilst adding its own oompf and bite to proceedings. 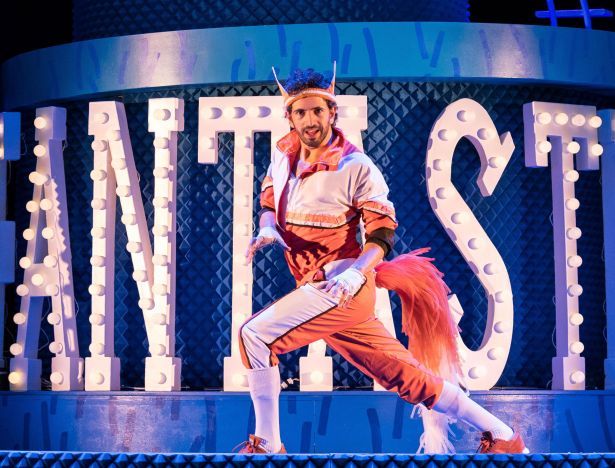 In fact, if anything, this version of Fantastic Mr Fox gives some of the more two dimensional characters from the book (Rabbit, Mole, and perhaps particularly Farmer Bean) a bit more substance. A backstory. It pushes everything along at a thrilling and jaunty rate.

Speaking of the writers, Fantastic Mr Fox was adapted for the stage – rather cleverly – by Sam Holcroft, and the music is by Arthur Darvill of Doctor Who fame who, it turns out, is an accomplished composer. Who knew? I certainly hope there is more to come from him music-wise as the songs included in this musical version of Fantastic Mr Fox were excellent. From the opening number sung acapella by a barbershop quartet (not for long – you’ll see what I mean) of bluebirds who go on to become the band for the night, playing their instruments and providing the general soundtrack live on stage to the final dancing-in-the-aisles air of the celebratory finale, it’s all memorable. I wandered out of the theatre happily humming a couple of the tunes.

The story, for those who aren’t aware, is all about the eponymous Mr Fox and his struggle to outwit three obnoxious, murderous farmers. In real life, we might sympathise with farmers who are losing their birds (chickens, turkeys, geese) to a fox, but these are not nice farmers. Especially Farmer Bean whose backstory does make him understandable for just a couple of minutes, but who otherwise is pure evil. No, on this occasion we want the fox and his family and friends to win – and win big. But Mr Fox has to deal with his own ego which, for story-telling purposes comes in the form of his big bushy tail. When that is shot off by one of the farmers, Mr Fox starts to unravel. It’s a good job he has friends by his side who refuse to listen to his orders to leave him alone (apart from Rabbit who never pays attention but seems to get by anyway). 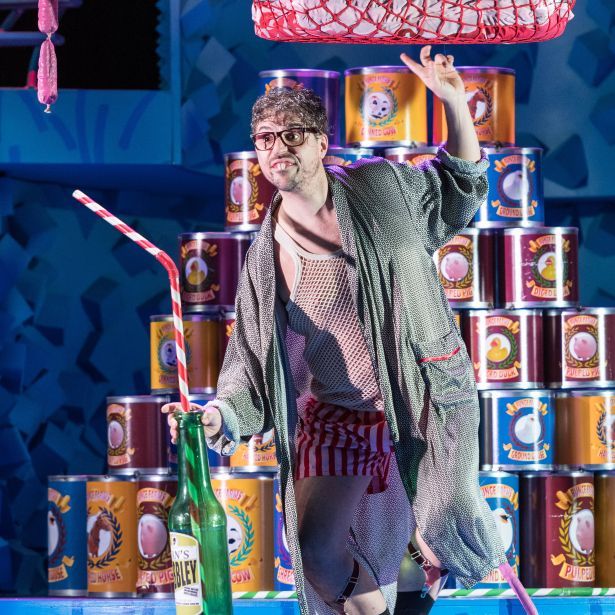 The costumes in this show are certainly different to what one might expect. Yes, there are tails and there are ears, but everything else is done in an abstract way which means that the foxes (there are three – and a half – of them) end up wearing orange tracksuits and headbands, Rabbit is kitted out like Jane Fonda in the 80s complete with fluffy leg warmers, and Badger is dressed up in a Newcastle United kit. Sporty is the theme here, as is the idea that everyone has a role to play, even if they don’t know what it is yet. It’s a nice touch.

And as for Mr Fox himself (played by Greg Barnett), he is a cocky so and so. He is downright proud of his foxy prowess, his balance, his speed, his ability to seize birds from the farms without being spotted (or, if he is spotted, to get away without getting caught)… And all that might have made him a thoroughly unlikeable character but for two reasons. The first is the way his friends and family treat him – they look up to him, they adore him, they need him as much as he needs them. Secondly, that’s the point. That’s the moral. Everyone needs friends to bring them down to earth. And the bonus reason – it’s an act. Mr Fox thinks he needs to be this way because he has all that responsibility, but, when we cut through the mask, we see he is as vulnerable as the rest.

Finally, a special mention much go to Rabbit, played so brilliantly by Sandy Foster. Probably the wackiest character on stage, certainly the funniest, she is the one the kids cheered for, and she is the one the parents laughed hardest at (her toy rabbit… well, you’ll just have to book tickets to get the joke there).

Fantastic Mr Fox is a hugely enjoyable laugh with superb music from beginning to end. Live instruments that the children will be fascinated by and clever staging make this a show not to miss.

Get your tickets here.