Theatre Review: The Signalman and The Waiting Room 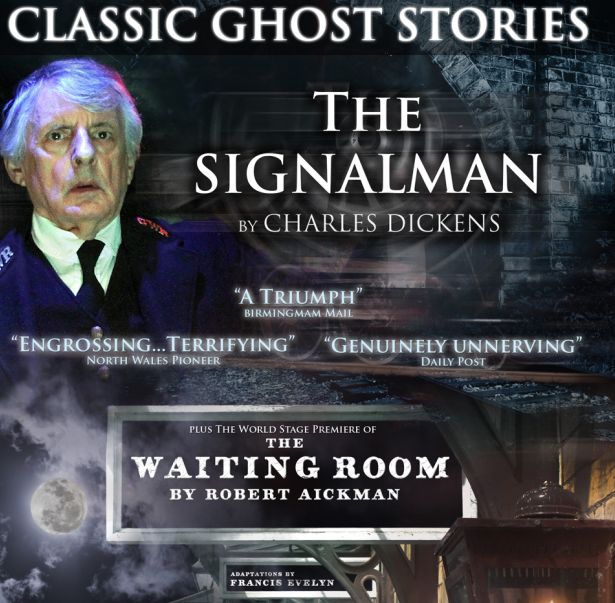 It’s dark. Very dark. And the atmosphere is intense. No one wants to be the first to speak, to move, to cough… everyone is staring intently at the stage, waiting, on edge, for something to happen. The audience is ready. The play can begin.

These two different stories, linked by the iconic steam train, both tell tales that will leave you wondering, and both are heartbreaking in their own chilling ways. The first, Robert Aickman’s The Waiting Room, tells the story of a man who fell asleep on the train and has come to the end of the line. With nowhere to sleep and no more trains until the morning, he must stay in the eponymous waiting room until daylight. It’s cold, as cold, some might say, as the grave, and although there is no one else there with him, he is most definitely not alone. As the story unfolds it transforms from a ghost story to a love story and back again, culminating in a tragic ending that we all hoped wouldn’t be the case.

The second story, Charles Dickens’ The Signalman (if you thought Dickens’ ghost stories began and ended with A Christmas Carol you would be wrong, and pleasantly surprised by this little slice of fear), is a study in character. Jack Shepherd, fresh from playing Pendleton in the previous play, is now the signalman himself. He is a fastidious man, a punctual man, a man who understands his duty and who won’t be swayed from it. But something haunts him. Something spectral, something that calls out in the night and warns him of dangers he can do nothing about…

Both stories are cleverly played out, leaving the audience to wonder and shiver and try to look away (but it’s impossible; we must know what happens next!). There are jumps and scares, but the main focus of the story telling is to build up an atmosphere of dread so that we don’t know where to look, what to think, or who to root for.

The acting is superb, and utterly believable, and this makes the play(s) – the audience is happy to suspend its disbelief for just a little while. However, an honourable mention must go to the director and set designer, Michael Lunney. Using lighting, optical illusions, and an incredibly creepy use of film, the final fear factor is realised.

The Signalman and The Waiting Room runs at the Orchard Theatre until 4th November 2015.

Theatre Review: The Signalman and The Waiting Room