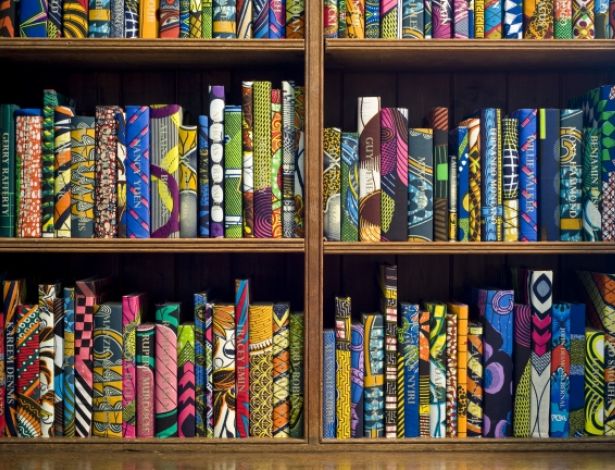 Coinciding with the gallery’s fifth anniversary, Shonibare’s powerful work explores themes of conflict, empire and migration in the centenary year of The Battle of the Somme, poignantly shown at Turner Contemporary against the dramatic backdrop of the North Sea.

Co-commissioned by Turner Contemporary and 14-18 NOW, Shonibare’s newest sculptural work End of Empire explores how alliances forged in the First World War changed British society forever, and continue to affect us today. The new work features two figures dressed in the artist’s signature bright and patterned fabrics; their globe-heads highlighting the countries involved in the First World War. Seated on a Victorian see-saw, the entire work slowly pivots in the gallery space, offering a metaphor for dialogue, balance and conflict, while symbolising the possibility of compromise and resolution between two opposing forces.

Presented alongside this new commission is Shonibare’s The British Library, a colourful work, celebrating and questioning how immigration has contributed to the British culture that we live in today. Shelves of books covered in colourful wax fabric fill the Sunley Gallery, their spines bearing the names of immigrants who have enriched British society. From T.S. Eliot and Hans Holbein to Zaha Hadid, The British Library reminds us that the displacement of communities by global war has consequences that inform our lives and attitudes today.

Accompanying the exhibition, Shonibare will discuss his exhibition and artistic practice in conversation with BBC Broadcaster and historian David Olusoga at Turner Contemporary on Tuesday 22 March at 6.30pm. Tickets for the event are available via turnercontemporary.org/whats-on.

Jenny Waldman, Director of 14-18 NOW, said:
“We are delighted to work with Turner Contemporary in commissioning this new work by Yinka Shonibare MBE to mark the centenary of the First World War. 14-18 NOW commissions extraordinary arts experiences connecting people with the First World War; in this new work, Shonibare focuses on the alliances and the shifting balance of global power at the core of the conflict.”