Wildlife charity asks volunteers to search in woodlands, as well as in gardens and parks

Last year over 16,000 stag beetle sightings were recorded, with 855 recorded in Kent. From late May into July, wildlife charity People’s Trust for Endangered Species (PTES) is calling for people across the UK to record any sightings of endangered stag beetles, as part of the charity’s annual ‘Great Stag Hunt’ (www.stagbeetles.ptes.org).

Stag beetles typically emerge from the ground in late May and can often be seen into late July flying around on warm summer evenings in search of mates. They are usually spotted in gardens, parks and other green spaces such as hedgerows, traditional orchards and allotments. This year, PTES is particularly interested to receive sightings of stag beetles in woodlands, as well as these other habitats.

To take part, simply record any stag beetles (male, female, or larvae) that you see online at www.stagbeetles.ptes.org

Laura Bower, Conservation Officer at PTES explains: “We know stag beetles live in woodlands in mainland Europe, but we don’t know whether they’re living in UK woodlands. Although these beautiful beetles are doing well in some parts of the country, in other areas they’re extremely rare and even extinct in some places. It’s so important to find out whether our woodlands are home to stag beetles or not, and we want to encourage anyone living near a woodland to keep their eyes peeled when they’re out for a walk, perhaps even just walking the dog, and tell us if they spot one of these iconic insects” 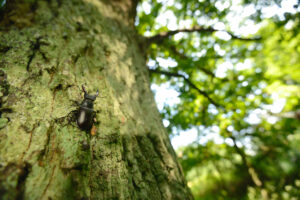 Stag beetles are Britain’s largest land beetle. The males’ impressive antler-like mandibles (jaws) arguably also make them one of the most spectacular. Males are easy to spot, as they can grow up to 75mm in length, are shiny black with chestnut wing cases and are most often seen flying looking for mates. Females are slightly smaller, between 30-50mm in length, and have smaller mandibles. Usually, they’re seen on the ground looking for somewhere to lay their eggs.

Laura adds: “Sadly, like so much of our native wildlife, stag beetles are also under threat. Habitat loss is the biggest issue facing these beetles, either when green spaces and woodlands become developed, or when parks and gardens become too tidy and any dead or decaying wood present – which is a vital food source for stag beetles – is removed. We also know stag beetles are attracted to warm tarmac surfaces, so as well as recording any sightings, we ask people to make sure they don’t accidently crush a stag beetle on a path or road.”

Anyone living in Kent, where there are known stag beetle populations, can go the extra mile this summer by doing a weekly stag beetle count. All that’s required is to walk a 500m transect six times between June and July on warm evenings and record any sightings on the European Stag Beetle Monitoring Network website. This data will help conservationists across Europe learn how the UK’s stag beetles are faring, which is crucial to their long-term conservation. 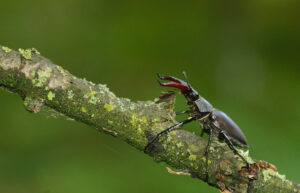 A great way to help stag beetles is to build a log pile, which provides a vital food source for larvae as well as a place for adult stag beetles to lay their eggs. Simply keep logs, tree stumps, fallen branches or old firewood and bury them upright in soil. Log piles benefit other wildlife too, from solitary bees to fungi and mosses. Once your log pile is created, you can record its location online at www.stagbeetles.ptes.org, where almost 2,000 are already recorded!

PTES’ Great Stag Hunt has been running since 1998. Every year thousands of sightings are submitted which enables conservationists to find out where stag beetles are living and where they’re most in need of help. You don’t need to have taken part before or have previous experience in wildlife surveys to join this year, but PTES does offer a free ‘beetle ID’ guide to help anyone new to beetle watching to recognise the differences between stag beetles and other insects.

To record a stag beetle sighting, for top tips on creating the perfect log pile, or to find out more about stag beetles, visit www.stagbeetles.ptes.org

And, if you’re on social media, PTES would love to see your stag beetle photos using #GreatStagHunt and tagging @PTES. 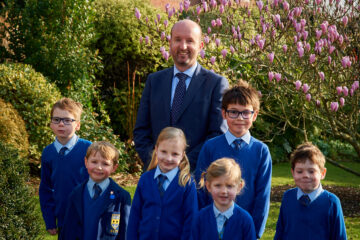