Westerham Brewery took home two Gold Medals in the Classic Premium Bitter and the Bottle/Can Speciality Medium to Dark Beers categories, as well as the Bronze Medal for Overall Champion of the Bottle/Can Competition at the SIBA South East Independent Beer Awards, which took place at the Tonbridge Juddians Rugby Club on the Friday 5th July. 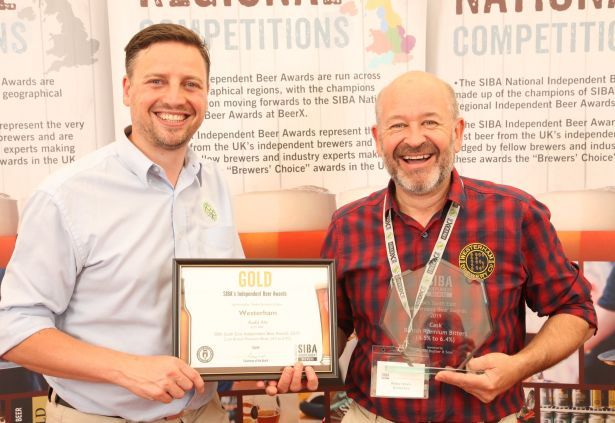 The Gold Medal marks the 7th Gold Medal for Audit Ale in 11 years. Meanwhile, Wally Winker’s Death by Chocolate (released as a special earlier this year) received its first awards: a Gold Medal in the Can/Bottle Speciality Medium to Dark Beers category, and a Bronze Medal in the Overall Champion of the Bottle/Can Competition. Audit Ale is a strong ale, brewed to the 1938 strength and using the same ingredients as the original best-selling bottled beer of the Black Eagle Brewery, and has a smooth, warming flavour with notes of rich dried fruit, raisins and molasses. Wally Winker’s Death by Chocolate is a triple chocolate stout, brewed with chocolate malt, cacao nibs, vanilla essence and chocolate essence. The stout has rich chocolate and vanilla on the nose, with plenty of coffee and chocolate on the palate followed by a medium dry finish.

“Judges had a tough job separating the pack as the standard was extremely high once again. The winners from the SIBA competition are officially the best independent craft beers in the UK, something brewers should be extremely proud of.” Ian Fozard, SIBA Chairman.

The SIBA South East Independent Beer Awards 2019 judged a huge range of beers across a number of styles in separate cask, keg and bottle & can competitions. As the awards are judged mostly by brewers, industry experts and beer journalists the SIBA Independent Beer Awards are very much seen as the prestigious ‘Brewers’ choice Awards’ by the industry. Robert Wicks, Founder and Head Brewer at Westerham Brewery, had this to say on their win:

“We were delighted to have Audit Ale triumph once again in the Premium Bitter Category. We were however really excited to win Gold for the Wally Winker’s Death by Chocolate. We expended more energy and skill in developing this beer and it appears to have paid off!” Robert Wicks, Founder and Head Brewer, The Westerham Brewery Co.

Westerham Brewery was established by Robert Wicks in 2004, picking up where the Black Eagle Brewery left off after its closure in 1965 and continuing a long heritage of brewing in Westerham. Westerham Brewery has revived many of the much-loved flavours of the old Black Eagle Brewery, using water from its own borehole into the Greensand Aquifer, and re-cultured yeast from the old brewery. The Brewery uses only traditionally floor-malted barley supplied by Crisp Malting of Fakenham, Norfolk. Westerham Brewery is also proud to use Kent hops, developing a close relationship with local hop growers. In fact, 90% of the hops used by the Brewery are grown in Kent. Known for their consistent, high-quality cask ales as well as a large selection of award-winning gluten free and vegan beer in bottle, can and keg, Westerham Brewery continues to go from strength to strength in their 15th year of brewing as The Westerham Brewery Co.